The victim alleged that when he failed to repay the loan amount, recovery agents morphed his photographs into a pornographic video and sent it to several of his contacts. 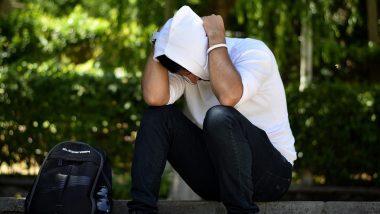 Mumbai, April 30: A 33-year-old man from Mumbai became the latest victim of cyber fraud after scamsters circulated a morphed pornographic video with his pictures online.

Police officials said that the fraudsters shared the morphed pornographic video of the victim to those on his phone's contact list after he defaulted on loan repayment. Maharashtra Bride Marries Another Man As Drunk Groom Reaches Wedding Venue 4 Hours Late.

According to a report in the Indian Express, an FIR has been against unknown persons under sections of the Indian Penal Code and the Information Technology Act for sending obscene content and for sexual harassment. Cops said that the video was sent to women as well.

In his complaint, the accused said that in November last year, he took a loan for Rs 7,000 through online transactions. While submitting the documents for the loan, the victim granted access to the contact list on his phone.

The victim alleged that when he failed to repay the loan amount, recovery agents morphed his photographs into a pornographic video and sent it to several of his contacts. The complainant further claimed that the alleged morphed video was sent to more than 12 people among his family and friends, including four women. Mumbai Shocker: 19-Year-Old Recovery Agent Arrested for Morphing Videos of Woman Who Defaulted on Loan Repayment.

Following this, the victim approached the Vasai-Virar police who directed him to the Mumbai Central Government Railway Police station as he had completed the process of taking the loan when he was at Dadar railway station, which falls under the railway police's jurisdiction.

(The above story first appeared on LatestLY on Apr 30, 2022 09:18 PM IST. For more news and updates on politics, world, sports, entertainment and lifestyle, log on to our website latestly.com).