The National Commission of Women (NCW) has written a letter to the Yogi Adityanath government in Uttar Pradesh seeking action against Samajwadi Party (SP) president Akhilesh Yadav for his tweet against suspended BJP leader Nupur Sharma. 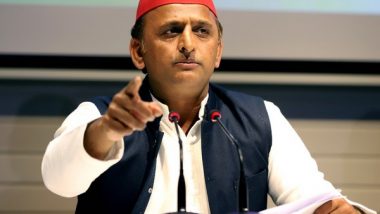 Taking suo moto cognisance of Akhilesh's tweet on July 1, the NCW has asked the state government to initiate action against the SP leader under the relevant provisions of law. The NCW has also asked the state government to inform it of the action taken within three days. Supreme Court Refuses to Grant Relief to Nupur Sharma, Says 'Her Outburst is Responsible For Udaipur Incident'.

Akhilesh had tweeted that "not only the face but body should also apologise and punitive action should be taken for attempting to disturb harmony and peace in the country". His comment referred to the top court saying "Nupur Sharma should have apologised to the nation".

(The above story first appeared on LatestLY on Jul 04, 2022 02:06 PM IST. For more news and updates on politics, world, sports, entertainment and lifestyle, log on to our website latestly.com).