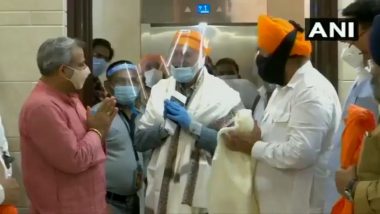 New Delhi, July 26: Eleven members of Sikh community from Afghanistan, who were granted short-term visas by Indian Embassy in Kabul, including Nidan Singh Sachdeva, who was abducted from a gurudwara in Paktia province last month, touched down in New Delhi on Sunday morning.

Ministry of External Affairs recently announced that India has decided to facilitate the return of Afghan Hindu and Sikh community members facing security threats in Afghanistan to India.

Nidan Singh Sachdeva and Other Afghan Sikhs Arrive in Delhi

#WATCH Nidan Singh (Afghan Sikh who was kidnapped a month ago and released recently) arrives in Delhi along with his family and a delegation of Afghan Sikhs. pic.twitter.com/3tLItqa4UC

The decision comes four months after an Islamic State-backed attack at a gurdwara in Kabul's Shor Bazaar killed at least 25 members of the community. India has condemned the "targeting and persecution" of minority community members by terrorists in Afghanistan at the behest of their external supporters remains a matter of grave concern.

Leaders of the Afghan Sikh community have appealed to the Indian government to accommodate the Sikhs and Hindus from Afghanistan and grant them legal entry with long term residency multiple entry visas.

Once a community of nearly 250,000 people, the Sikh and Hindu community in Afghanistan has endured years of discrimination and violence from extremists, and the community is now estimated to comprise fewer than 100 families across the country.