In what can trigger a major political controversy, Pakistan-occupied Kashmir or PoK was mentioned as "Azad Kashmir" in a question paper for class 10 in Madhya Pradesh. 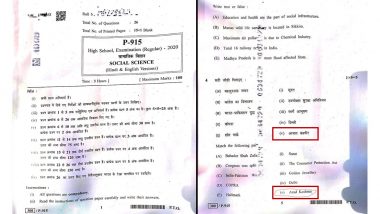 "The Board has suspended two persons who set & moderated the Class 10 question paper in which Pakistan Occupied Kashmir has been called Azad Kashmir," Saleena Singh, Chairperson Madhya Pradesh Board of Secondary Education, told news agency ANI. The term "Azad Kashmir" is often used by Pakistan to regard part of Kashmir under its occupation. India, however, calls the region Pakistan-occupied Kashmir.

(The above story first appeared on LatestLY on Mar 07, 2020 03:42 PM IST. For more news and updates on politics, world, sports, entertainment and lifestyle, log on to our website latestly.com).