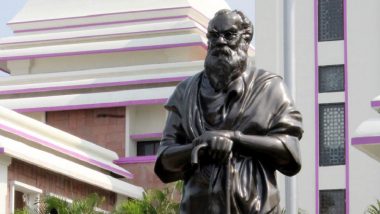 Coimbatore, July 17: In a shocking incident, a statue of late social activist Periyar EV Ramasamy was vandalised in Coimbatore on Friday morning. According to a Times Now report, a witness noticed saffron paint poured all over the statue. An investigation is underway and police are scanning the CCTV footage from near the area. They further assured that the culprits will be arrested.

After the police came to the spot, Periyarists and over 20 people assembled and staged a protest, demanding action be taken against the miscreants who indulged in the act. Periyar Statue Vandalised Near Kaliyapattai in Tamil Nadu's Chengalpattu; MK Stalin Demands Strict Action Against Culprits.

Police personnel have also been deployed at five more statues of Periyar and three statues of Dr B R Ambedkar in the city. DMK MLA N Karthik condemned the desecration of the statue and demanded that the police arrest the culprits.

(The above story first appeared on LatestLY on Jul 17, 2020 10:53 AM IST. For more news and updates on politics, world, sports, entertainment and lifestyle, log on to our website latestly.com).