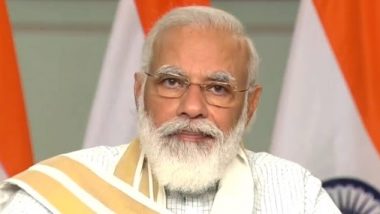 New Delhi, August 13: Prime Minister Narendra Modi on Thursday launched the much-awaited ‘Transparent Taxation-Honoring the Honest’ platform for honouring the country's honest taxpayers. During his address, the Prime Minister said that this platform has several big reforms such as faceless assessment, faceless appeal and taxpayers charter. He added saying that faceless assessment and taxpayers charter come in force from today, whereas faceless appeal service will be available from September 25, 2020. "Earlier, our focus has been on banking the unbanked, securing the unsecured, funding the unfunded. Today, we are launching Honouring the Honest", he added.

The Prime Minister said the emphasis is on making every rule-law, policy people-centric and public friendly and this is the use of the new governance model and the country is getting its results. He said there was a time when we used to talk about reforms. Decisions were taken in desperation or under pressure, and they were called reforms. CBDT Issues Rs 71,229 Crore Worth Refunds Since April 8 to Help Taxpayers With Liquidity Amid COVID-19 Pandemic.

During her address, Finance Minister Nirmala Sitharaman said that PM's vision is to empower the taxpayer, to provide a transparent system & to honour honest taxpayers. "To realise this vision, CBDT has given a framework & put in place this system: Finance Minister Sitharaman at launch of platform for 'Transparent Taxation–Honoring the Honest'", she said.

The 2020-21 Budget unveiled on February 1, had announced a 'taxpayer charter', which is expected to have statutory status and will empower citizens by ensuring time-bound services by the Income Tax department.

The virtual event was attended by various chambers of commerce, trade associations, chartered accountants' associations and 'eminent' taxpayers. On Wednesday, the Income Tax (IT) Department had issued instructions for mandatory attendance of officers to view the web telecast of the Prime Minister address to I-T officers and taxpayers.

(The above story first appeared on LatestLY on Aug 13, 2020 11:36 AM IST. For more news and updates on politics, world, sports, entertainment and lifestyle, log on to our website latestly.com).