Ansari was booked under section 153 A (vilification or attacks upon the religion, race, place of birth, residence, language etc of any particular group or class or upon the founders and prophets of a religion) of the Indian Penal Code. 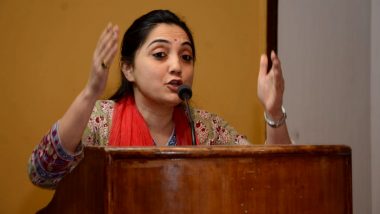 According to a report in the Hindustan Times, the police arrested Ansari after a crowd reached his residence, thrashed him and protested against his social media post. They also demanded his arrest. Amid the protest, cops from Bhiwandi also reached Ansari's residence. Prophet Remarks Row: Geert Wilders, Dutch Politician Receives Death Threats for Supporting Suspended BJP Leader Nupur Sharma, Says 'I Am Not Indian nor a Hindu'.

Following this, the Bhiwandi police registered a case against Ansari under section 153 A (vilification or attacks upon the religion, race, place of birth, residence, language etc of any particular group or class or upon the founders and prophets of a religion) of Indian Penal Code (IPC).

Yogesh Chavan, deputy commissioner of police, Bhiwandi said. "We have arrested the youth and also registered a case under relevant sections. We have already started probing the incident. We have also deployed police near the area to prevent further escalation."

On Saturday, the Bhiwandi police issued summons to BJP leader Nupur Sharma over her remarks against Prophet Muhammed. The police have asked Sharma to be present at the police station in the coming days. Nupur Sharma's Prophet Muhammed Remark Row: From Making Statement on Gyanvapi Masjid Case to Tendering Apology; Here's All That Transpired And Who Said What.

Chetan Kakde, senior police inspector said, "We have issued summons to her recently, asking her to present herself for inquiries at the police station. The date of the summons cannot be disclosed due to security reasons.” The Bhiwandi police, on May 30, registered an FIR against Sharma.

Besides Bhiwandi police, Pydhonie police station and Mumbra Police in Thane have also summoned the BJP leader to record her statement in connection with her objectionable statements on Prophet Muhammed.

(The above story first appeared on LatestLY on Jun 13, 2022 05:14 PM IST. For more news and updates on politics, world, sports, entertainment and lifestyle, log on to our website latestly.com).