Wilders said that he supported Sharma as he believed that secularism should not mean that 'demeaning Hindu Gods is justified and telling the truth about Muhammad is not'. 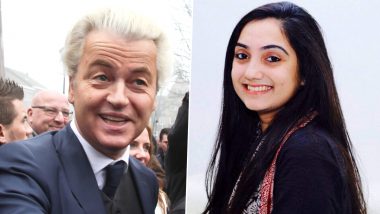 Mumbai, June 12: Dutch politician Geert Wilders on Sunday said that he has been receiving death threats for supporting suspended BJP leader Nupur Sharma. Interestingly, Wilders was among the few politicians who extended their support to Sharma after the BJP leader landed in a storm over her comments on Prophet Muhammed which she made during a TV debate.

So this is what I get supporting the brave #NupurSharma.

It makes me even more determined and proud supporting her.

Taking to social media, Wilders said that the death threats make him even more determined and proud to support her. "For evil may never win. Never," Wilders said in his tweet. Nupur Sharma's Prophet Muhammed Remark Row: From Making Statement on Gyanvapi Masjid Case to Tendering Apology; Here's All That Transpired And Who Said What.

The Dutch politician, who has been criticised for bashing Islam said that he is neither Indian nor a Hindu. Wilders said that he supported Sharma as he believed that secularism should not mean that 'demeaning Hindu Gods is justified and telling the truth about Muhammad is not'.

"So when #napursharma reacted to someone demeaning Hindu Gods it was totally justified," he said in his tweet. Wilders also urged Prime Minister Narendra Modi to defend and support Sharma, who has been suspended from the party. "Only criminals and terrorists use street violence to express their religious intolerance and hate," he said, reports Hindustan Times.

I am not Indian nor a Hindu.

But I know one thing.

Secularism should not mean that demeaning Hindu Gods is justified and telling the truth about Muhammad is not.

So when #napursharma reacted to someone demeaning Hindu Gods it was totally justified.#IsupportNupurSharma

Sharma's comment on Prophet Muhammed has created ripples not only in India but also across the globe. It has now become the centre of the ongoing violence that is taking place across the country. States such as Delhi, Maharashtra, Uttar Pradesh, Jharkhand, West Bengal, and Karnataka saw protests demanding the arrested of the suspended BJP leader.

Ever since the controversy broke out, Gilders has been constantly tweeting in support of Nupur Sharma. He has also criticised protests against the suspended BJP leader in India. In April 2022, Wilders' Twitter account was temporarily suspended for his anti-Islam tweet in which he mentioned Pakistan Prime Minister Shehbaz Sharif. Prophet Remarks Row: From Ranchi to Howrah, Violent Protests Erupt in Several Parts of the Country Over Controversial Statement by Suspended BJP Leader Nupur Sharma.

After her suspension from the party, Sharma issued an apology and said. "If my words have caused discomfort or hurt religious feelings of anyone whatsoever, I hereby unconditionally withdraw my statement." In what was seen as damage control, the BJP said that it strongly denounces insult of any religious personality.

(The above story first appeared on LatestLY on Jun 12, 2022 07:39 PM IST. For more news and updates on politics, world, sports, entertainment and lifestyle, log on to our website latestly.com).