Pulwama Terror Attack: Political Leadership as Much to Blame as Pakistan For Kashmir Conflict 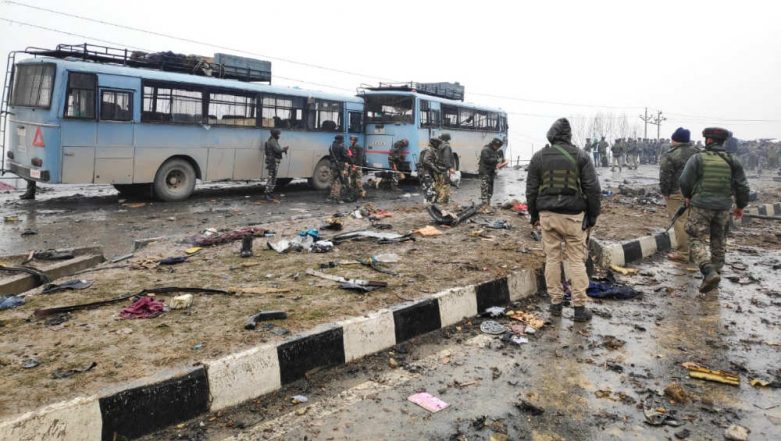 The site on on the Srinagar-Jammu highway where over 40 CRPF troopers were killed in an audacious suicide attack. (Photo Credits: IANS)

As many as 40 jawans of CRPF lost their lives in Jammu and Kashmir’s Pulwama when a Jaish-e-Mohammed (JeM) terrorist rammed an explosive-laden SUV into a bus the personnel were travelling in. While political leaders cutting across party lines condemned the cowardly attack on India’s security forces, they are as much responsible as Pakistan for the ongoing conflict in Kashmir. While Kashmiri leaders often give a balanced response to such brutality to suit their politics, both Congress and BJP only provide the people of Valley hollow slogans.

The Bharatiya Janata Party (BJP) at the Centre, over the last five years, preferred to use an iron fist against the militants. However, Prime Minister Narendra Modi-led government did little to counter the growing anti-India sentiment which is the root cause of chaos in the Valley. PM Modi spoke about Vishwas and Vikas, but his government failed to take concentrated efforts to restore faith among Kashmiris. The Vikas took a backseat due to the uneasy alliance of the People's Democratic Party (PDP) and BJP that eventually met a deadlock last year, leaving Jammu and Kashmir in political uncertainty. Pulwama Terror Attack: Jammu And Kashmir Governor Satya Pal Malik Admits Intelligence Failure.

While no one can deny the fact that Pakistan encouraged militancy and helped separatist movements in Kashmir, one should also concede that the Indian government, both under the BJP and the Congress, failed to prioritise the welfare of the ordinary Kashmiris.

The call for Azadi would not have received a new life post-Independence, had the governance, justice and development penetrated swiftly into the Valley. Revered socialist leader Narayan had once opined that the situation in Kashmir would continue to remain grave, even if Pakistan stops interfering. Pulwama Terror Attack: Terrorists Are Deploying Car Bombs to Increase Scale of Destruction.

Narayan believed the problems in Kashmir were deeply rooted in the abrogation of autonomy granted to the state upon the independence of India. According to him, the best and long-lasting solution for Kashmir would have been the restoration of greater autonomy. He also expressed sharp disapproval of attempts by the state to scuttle the anti-India movement with an iron fist, calling it highly reactionary.

The sentiment of self-determination could have been neutralised by ensuring state autonomy through legislative assembly, development and regional pride. An eye to an eye policy by the current regime may have eliminated some militants in the Valley, but it has strengthened the separatists as well as led to the martyrdom of several jawans. Flag bearers of Azadi see New Delhi as a betrayer who did not fulfil its promise of providing them with the right to self-determination. List of 42 Jawans on CRPF Bus Attacked By JeM in Jammu & Kashmir.

India could have prevented this sentiment of betrayal from growing among ordinary Kashmiris by providing them with the amount of freedom – social and economic, as enjoyed by Indians living in other parts of the nation. However, the political leadership, over the years, failed on this front. Pakistan’s blatant support to terrorists and Kashmir-based militants stops the Indian government from demilitarising the entire state. However, by revoking the draconian Armed Forces Special Powers Act (AFSPA) from the civilian regions of Kashmir and providing political stability and development, New Delhi can win back the trust of aam Kashmiris.

Punish terrorists but don't forget that politics lies at the heart of the insurgency. Remember that the surgical strikes of 2016, to avenge the Uri killings, had little impact on the ground reality in the Valley. Soldiers are to secure borders but they don't deserve to die.