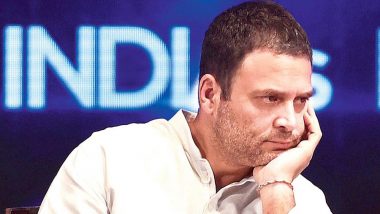 Surat, July 9: Congress leader Rahul Gandhi on Tuesday was summoned by a Surat court in connection with a case registered by Samast Gujarati Modh Modi Samaj over his controversial comment on “Modi” community. The court asked Gandhi to appear on July 16.  In April, during an election rally, the Congress leader had said, “Why do all thieves have Modi in their names?”

While taking a jibe at Prime Minister Modi, Gandhi during the rally Kolar reportedly had said, “I have a question. Why do all thieves have Modi in their names -- whether it is Nirav Modi, Lalit Modi or Narendra Modi? We don't know how many more such Modis will come out." Rahul Should Apologise for 'all Thieves Have Modi in Their Surnames' Remark: Irani

After his comments, the then Congress President faced a flak form the community. Two days after his comment, a defamation suit was also filed against the Congress leader in Bhopal. "If you want to say such things, please say it to the person concerned. Talking about a community is objectionable. When I came to the court today, a few of my friends made fun of me. After getting hurt because of this, I have filed this defamation suit,” Pradeep Modi, the petitioner said. Defamation Suit Against Rahul in Bhopal Court over His 'Saare Modi Chor Hai' Remark.

Purnesh Modi, Gujarat Bharatiya Janata Party (BJP) had also filed a criminal defamation complaint in a court in Surat against Gandhi for his comments. The complaint was filed in the sessions court under IPC sections 499 and 500.

(The above story first appeared on LatestLY on Jul 09, 2019 09:25 PM IST. For more news and updates on politics, world, sports, entertainment and lifestyle, log on to our website latestly.com).