The Supreme Court on Monday extended the parole of A.G. Perarivalan, one of the convicts in the former Prime Minister Rajiv Gandhi's assassination case. 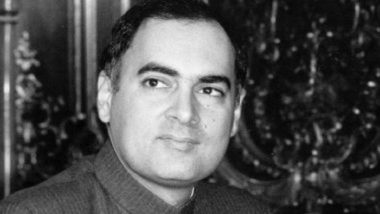 New Delhi, Nov 23: The Supreme Court on Monday extended the parole of A.G. Perarivalan, one of the convicts in the former Prime Minister Rajiv Gandhi's assassination case.

Perarivalan's parole was increased by one week for his medical check-up. The top court asked the Tamil Nadu government to provide police protection to him in the hospital. Rajiv Gandhi Assassination Case: Supreme Court Unhappy with Pendency of Convict's Pardon Plea.

Senior Advocate Gopal Sankaranarayanan, representing Perarivalan, submitted before a bench headed by Justice L. Nageswara Rao that the parole was given on November 9, which was later extended by the Madras High Court to November 23. "He also requested for police escort for medical exams, if the state can grant parole for another week," Sankaranarayanan submitted.

The bench said it will hear the matter on the next date for final disposal and extended the parole for a week and directed the Tamil Nadu government to provide protection during medical check-up.

The order from the top court came after the Central Bureau of Investigation submitted it does not oppose his release and the Tamil Nadu Governor can decide on it.

On November 3, the Supreme Court expressed its dissatisfaction over the pendency of pardon-plea of a convict in the Rajiv Gandhi assassination case for over two years with the Tamil Nadu Governor.

The top court had asked Additional Advocate General for Tamil Nadu Balaji Srinivasan, why is the Governor taking so much time?

Justice Rao noted that the larger conspiracy only deals with whether other persons are involved in the case. "What about Constitution bench judgement which allows the Supreme Court to intervene," said Justice Rao.

The bench emphasized that it does not intend to exercise its jurisdiction, but it is not happy with the pendency of this matter for over two years.

The remarks from the bench were made during the hearing of a plea of 46-year-old Perarivalan, who has sought suspension of his life sentence in the case till the CBI-led Multi-Disciplinary Monitoring Agency (MDMA) probe is completed.

(The above story first appeared on LatestLY on Nov 23, 2020 01:31 PM IST. For more news and updates on politics, world, sports, entertainment and lifestyle, log on to our website latestly.com).