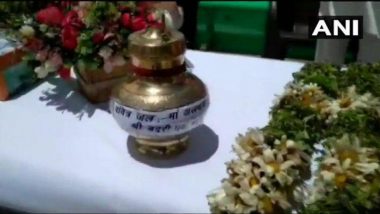 Uttarakhand, July 28: Ahead of the foundation stone laying ceremony of Ram Temple, soil from Badrinath and water from Alakananda River is being sent to Ayodhya. According to an ANI update, a delegation of Vishwa Hindu Parishad on Monday left for Ayodhya with the soil and water. PM Narendra Modi to Lay Foundation Stone of Ram Temple on August 5, All Chief Ministers To be Invited to the Event.

Prime Minister Narendra Modi has been invited to lay the foundation stone of Ram Temple on August 5. In order to ensure social distancing, there would not be more than 200 people, including 150 invitees.

Soil From Badrinath & Water From Alakananda River Sent to Ayodhya:

Uttarakhand: Soil from Badrinath & water from Alakananda river is being sent to UP's Ayodhya for foundation stone laying ceremony of Ram Temple. A delegation of Vishwa Hindu Parishad y'day left for Ayodhya with the soil & water. The ceremony is scheduled to be held on 5th August. pic.twitter.com/TkbLpQbewO

All chief ministers will also be given an invitation to the programme, according to Swami Govind Dev Giri. Sri Ram Janmabhoomi Teertha Kshetra Trust was formed to oversee the construction of Ram Mandir. The Trust took the decision that the proposed Ram Temple would have a height of 161 feet along with five domes, instead of three.

The Supreme Court in November last year directed the central government to hand over the site at Ayodhya, where Babari Masjid once stood, for the construction of the Ram temple and set up a trust for this.

(The above story first appeared on LatestLY on Jul 28, 2020 08:33 AM IST. For more news and updates on politics, world, sports, entertainment and lifestyle, log on to our website latestly.com).