SIO South Maharashtra Zonal President Salman Khan said that the organisation has carried out similar blood donation drives in the wake of the severe blood shortages experienced in Maharashtra since the past few weeks. 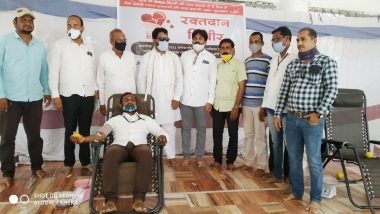 Beed, April 13: In an unusual but welcome step on the eve of the holy Ramzan month, a mosque in Maharashtra's Beed became the venue for a blood donation camp as the state grapples with a huge shortage of blood, an organiser said on Tuesday.

The blood donation camp was organised by the Students Islamic Organisation (SIO) of India at the Takiya Mosque in which hundreds of people voluntarily participated, Rafid Shahad, Maharashtra South SIO Zonal Secretary, said.

From the drive conducted all day on Monday, the SIO collected around 150 units of blood which will be handed over to the authorities, said SIO member Khizer Shaikh. Ramzan 2021 Timetable: Know Sehri, Iftar Timings in Mumbai, Delhi, Lucknow, Kolkata, Chennai and Other Cities of India for the Month of Ramadan.

SIO South Maharashtra Zonal President Salman Khan said that the organisation has carried out similar blood donation drives in the wake of the severe blood shortages experienced in Maharashtra since the past few weeks.

"We have conducted around a dozen similar camps in Mumbai, Thane, Latur, Jalna, Solapur, and Beed and collected around 500 units of blood. We have appealed to the Muslim community to come forward for the humanitarian cause on the Ramzan eve and they have responded in large numbers," he said.

Other SIO volunteers pointed out that during the holy month of fasting, Muslims around the world get into a spiritual and charitable mode and blood donation is one noble way of assisting the government in the ongoing Covid pandemic challenge with the huge scarcity of blood in the state.

They assured that all Covid and safety protocols are strictly followed for the blood donation drives and over the next few weeks, many more such camps shall be held across the state. Ramzan Mubarak 2021 Wishes And Shayari: Happy Ramadan Urdu Messages, SMS, Chand Mubarak Image And Greetings To Celebrate Arrival of the Holy Month.

The state is currently in the grip of a blood shortage and appeals have gone out from Chief Minister Uddhav Thackeray, Health Minister Rajesh Tope, Housing Minister Jitendra Awhad, Congress President Nana Patole and others asking people to come forward and donate blood or organise blood donation camps.

(The above story first appeared on LatestLY on Apr 13, 2021 06:46 PM IST. For more news and updates on politics, world, sports, entertainment and lifestyle, log on to our website latestly.com).