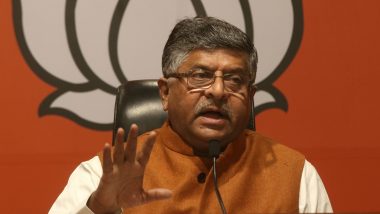 Patna, October 17: A close shave for Union Minister Ravi Shankar Prasad was reported at Patna airport, after the blades of his helicopter "broke" down. The minor incident involving Prasad's chopper took place earlier today, after he was returning from a campaign event with party leaders Mangal Pandey and Sanjay Jha.

The blades of the VIP helicopter struck an overhead wiring of a construction site, which led to the minor accident at the Patna airport, reported India Today. No one onboard the chopper was reported to be injured. West Bengal Govt Muzzling Opposition Voice As People Yearn for Change: Ravi Shankar Prasad.

An official statement from the Patna Airport was awaited by the time this report was published. Prasad was also yet to comment on the incident.

Notably, Prasad, the Lok Sabha MP from Patna, is one of the star campaigners in the Bihar assembly elections 2020 for the Bharatiya Janata Party (BJP). He is actively involved in the campaign trail and is scheduled to address more public events in the days to come.

(The above story first appeared on LatestLY on Oct 17, 2020 08:20 PM IST. For more news and updates on politics, world, sports, entertainment and lifestyle, log on to our website latestly.com).