The Ministry of External Affairs on Saturday said that no Indian is now left in the war torn Ukraine's Kharkiv region. 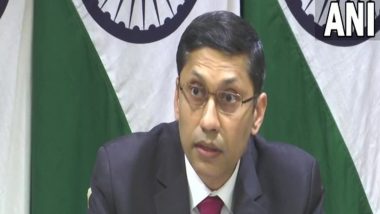 New Delhi, March 5: The Ministry of External Affairs on Saturday said that no Indian is now left in the war torn Ukraine's Kharkiv region.

"From Pisochyn & Kharkiv, we should be able to clear out everyone in the next few hours, so far I know no one is left in Kharkhiv," MEA Spokesperson Arindam Bagchi said in a media briefing. Russia-Ukraine War: All Indian Students Evacuated From Pisochyn.

He said that now the main focus is on the Sumy region.

In nearby Pisochyn, Bagchi said, as of a few hours ago there were less than 300 students there who were to be evacuated. "We hope to complete that task by today," the spokesperson said.

He said during the past 24 hours, 15 flights have landed with around 2,900 people under Operation Ganga. Till now, approximately 13,300 people have returned to India so far by 63 flights.

"As many as 13 flights are scheduled in the next 24 hours," Bagchi said.

The conflict between Russia and Ukraine started in the early hours of February 24 after Russian forces launched a major assault on Ukraine, firing missiles on cities and military installations and posing a serious threat to the Indian citizens residing there. Since then, India is evacuating its citizens from the war-torn region.

Meanwhile. the MEA spokesperson informed that one Nepal national will also be arriving in India.

(The above story first appeared on LatestLY on Mar 05, 2022 10:34 PM IST. For more news and updates on politics, world, sports, entertainment and lifestyle, log on to our website latestly.com).