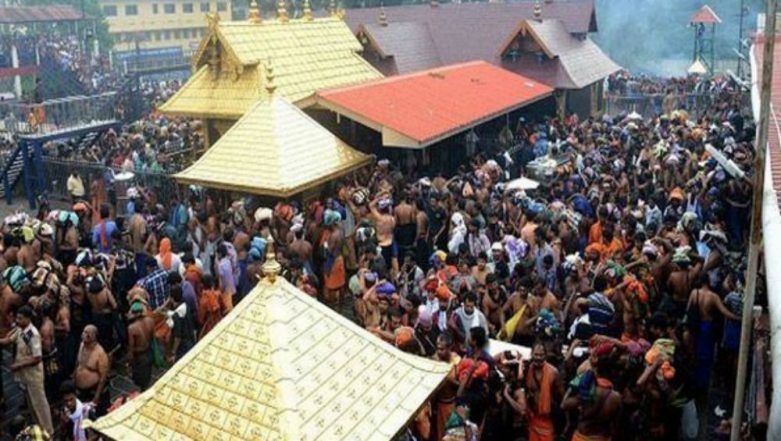 Nilakkal, January 2: Two women, under the 50 years of age, on Wednesday entered Kerala's Sabarimala temple, which had witnessed frenzied protests from devotees over the entry of women of menstruating age. The women both in their early 40s, entered the sanctum sanctorum of Sabarimala temple

early this morning. They started their climb around midnight and reached the hilltop shrine after 3:45 am and left after praying to Lord Ayyappa.

The women were identified as Bindu and Kanakadurga. They were accompanied by police personnel. They had made an unsuccessful bid to visit Sabarimala temple on December 18. Traditionally, girls and women in the menstruating age group of 10-50 years were barred from offering prayers at the temple, the presiding deity of which is 'Naishtika Brahmachari' (perennial celibate). Sabarimala Row: 47-Year-Old Woman Devotee Suffers Panic Attack Enroute Shrine as Protesters Heckle Her.

Over a dozen women had so far made unsuccessful attempts to trek to the Sabarimala shrine to offer prayers during the Mandalam season. The Ayyappa temple had witnessed massive protests by devotees against the state government's decision to implement the Supreme Court's September 28 verdict, opening its doors to women of all ages to offer prayers. The apex court in a 4-1 verdict had struck down a rule that disallowed girls and women in the 10-50 age group from entering the Sabarimala temple.

Watch video of two women, under the 50 years of age, entering Sabarimala temple:

Sabarimala temple opened for the 21-day 'Makaravilakku' festival on Sunday evening. The temple had closed on December 27, marking the culmination of the 41-day annual Mandala puja festivities. The Makaravillaku will be held on January 14 and the shrine will be closed at 7 am on January 20.