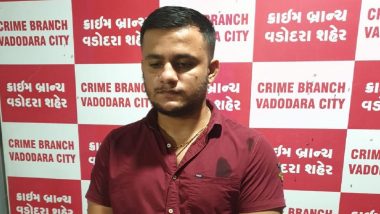 Vadodara, July 12: Shubham Mishra, who uploaded a video hurling abuses on comedian Agrima Joshua and allegedly issued rape threats to her, was detained by the Vadodara Police on Sunday. An FIR was also registered against him under various penal charges on basis of the clip going viral. Agrima Joshua Controversy: NCW Requests Gujarat Police to Take Action Against Shubham Mishra.

The 26-year-old, according to reports, has been booked under  IPC sections 294 (obscenity), 354 (A), 504 (intentionally insults to break public peace) 505 (statements conducing to public mischief), 506 (criminal intimidation), 509 (intending to insult modesty of a woman).

The action comes a day after the National Commission for Women (NCW) sought the Vadodara police's intervention in the case. A letter was written by NCW chairperson Rekha Sharma, appealing the Gujarat Director General of Police (DGP) Shivanand Jha to take immediate action against the accused.

Apart from the NCW, Maharashtra Home Minister Anil Deshmukh had also directed the Mumbai Police Commissioner to take action against the Vadodara-based Mishra for his intimidating comments against the comedian.

Chhatrapati Shivaji Maharaj taught us to respect women.But if someone is using/threatening the wrong language about women, then there is a law for them. @MahaCyber1 verify this video. @CPMumbaiPolice take appropriate legal action against the person in the video as per the rules. https://t.co/4zxwOTIh0r

Mishra's video came to the fore after a year-old clip of Joshua, in which she made some "objectionable remarks" against Maharashtra's warrior king Chhatrapati Shivaji Maharaj, recently went viral.

Deshmukh, after being tagged by netizens in the clip in which she could be heard making allegedly objectionable remarks, had asked the police to initiate legal action against her. Joshua, in response to the Home Minister's order, had tweeted an apology.

(The above story first appeared on LatestLY on Jul 13, 2020 12:11 AM IST. For more news and updates on politics, world, sports, entertainment and lifestyle, log on to our website latestly.com).