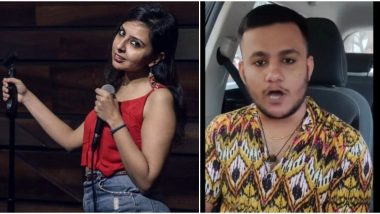 Comedian Agrima Joshua has been facing a lot of flak from people who are fashioning themselves as admirers of Chhatrapati Shivaji Maharaj for an old standup routine of hers. A video of Agrima has been going viral where she was talking about the Rs 2500 crore worth statue of the Maratha king. Although she was trolling the claims on Quora about the statue (that it has solar panels etc), no where in the video, has she taken any digs at the king. However, that hasn't stopped Tweeple from slamming her, while Maharashtra Home Minister Minister Anil Deshmukh wants Mumbai Police to take action against her. Agrima Joshua, Stand-Up Comedian, Faces Online Wrath After Old Video of Her Cracking Jokes on Chhatrapati Shivaji Maharaj's Statue Resurfaces (Watch Video).

Meanwhile certain haters of the comedian have gone ahead and posted videos where they are openly issuing rape threats against Agrima. Posting these videos on Twitter, many supporters of Agrima Joshua are asking the National Commission for Women and the Police department to take strong action against these miscreants. Some of them have even tagged Minister Anil Deshmukh in their tweets.

Check Out Their Tweets Below:

Respected @AnilDeshmukhNCP sir 🙏🏽 Does a joke however offensive justify this kind of a public threat to a woman? This Shubham Mishra is issuing a public threat 2 rape & inciting others 2 do so. Clear offence under Section 503 IPC. Can u pls ask @MumbaiPolice 2 take action sir? 🙏🏽 pic.twitter.com/lKyZrl0Ofq

The impunity and fearlessness with which death/rape threats are issued for women in this country is surprising, not shocking! This is a country where infants aren't safe! Time to change all that. Tag employers, friends,family members of these rowdies plz. Hate has consequences https://t.co/XlKvDHcT4B

The National Commission for Women in India in their tweet have asked Gujarat Police to look into the video and take the necessary action against Shubham Mishra, the perpetrator in the video.

Keeping in line with #NCW's commitment towards ensuring safety of #women online, our Chairperson @sharmarekha has written to @dgpgujarat for taking immediate action against Shubham Mishra, the man hurling abuses against a female comedian in this video.@kunalkamra88 @SaketGokhale https://t.co/6zfr6IEbyX

The Gujarat Police in their tweet to Onir's have told the Vadodara Police to look into the matter.

Here's the video of the controversial joke that Agrima had made on the statue:

Agrima Joshua has taken down her video. But the fact that people issuing rape threats are seen as a minor offence over a joke on people making tall claims on a statue, says a lot of about the outrage culture of our system.

(The above story first appeared on LatestLY on Jul 12, 2020 04:22 PM IST. For more news and updates on politics, world, sports, entertainment and lifestyle, log on to our website latestly.com).