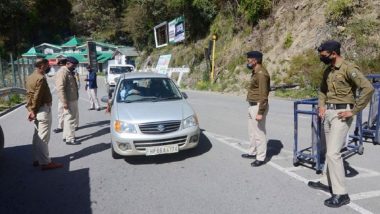 Gangtok, July 26: The Sikkim government on Sunday announced an extension in lockdown till August 1 amid rising COVID-19 cases in the state. The decision also came shortly after officials confirmed the first death due to the lethal virus. A 74-year-old man, based in "hotspot" Rongli, died earlier today at a state-run medical facility.

Sikkim was placed under a strict lockdown from July 20. The one-week shutdown was scheduled to end tomorrow, on July 27, but the government decided to extend the restrictions by another week to contain the disease transmission. India’s COVID-19 Tally Inches Closer To 14-Lakh Mark With a Spike of 48,661 New Coronavirus Cases, Death Toll Rises to 32,063.

An official, while speaking to reporters, said the lockdown may continue till the government is able to bring COVID-19 transmission under control in the densely populated region of East Sikkim.

Despite the week-long lockdown imposed in the region, alarming surge in COVID-19 cases was recorded. The single-day tally soared to 108, highest in the state so far, on July 22.

Sikkim's current count of total cases stood at 499, including 356 active infections and 142 people who have been discharged after full recovery. The death toll officially stood at 1, but another person who died this week is suspected to had contracted the virus.

The Northeast region, which appeared to have survived the brunt of pandemic in its initial phase, has recorded a significant surge in new infections over the past fortnight's period. The worst-affected state in the region is Assam, where the tally of infections crossed 31,000, including 77 deaths and more than 9,000 active cases.

(The above story first appeared on LatestLY on Jul 26, 2020 03:51 PM IST. For more news and updates on politics, world, sports, entertainment and lifestyle, log on to our website latestly.com).