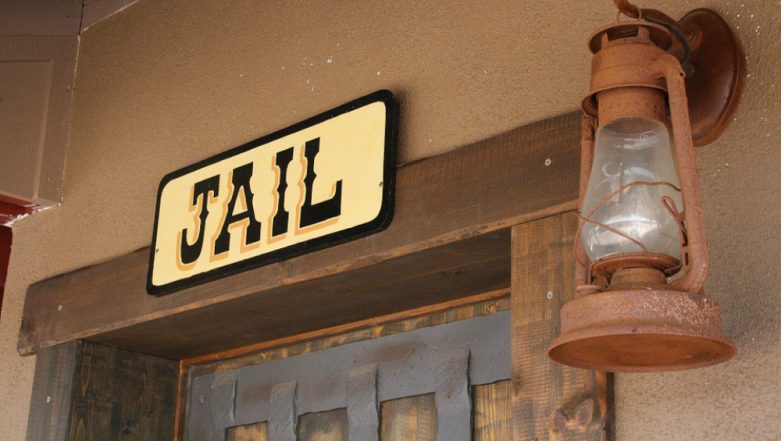 New Delhi, April 7: A police constable from Tamil Nadu, who was posted at a prison in Delhi, was dismissed from his duties after he smuggled mobiles in his shoes to inmates. Reports inform that a Tamil Nadu Special Police Service constable was sacked after he was allegedly found transporting mobile phones, tobacco and other banned items to several inmates at the high-security Mandoli prison in the national capital. According to a report by Hindustan Times, the sacked cop has been identified as Anbarasan who hails from Sivaganga district in Tamil Nadu. Anbarasan was posted on duty at Mandoli, which houses over 3700 inmates. Taking Selfie in Judge's Chair Lands Trainee Cop in Madhya Pradesh Jail.

A police official was quoted saying that the scrutiny of CCTV footage showed Anbarasan hiding the mobiles in his shoes and to facilitate smuggling, he operated during night shifts. The report revealed that audio clips of the conversations of Anbarasan with the associates or relatives of inmates clearly show the cop demanding bribes for supplying the banned items to them. Bihar Police's Poor English Lands Trader in Jail; Here’s How.

It must be noted that the TSP (8th battalion) are tasked with providing security to the Tihar and Mandoli prisons. Also, apart from this, the Central Reserve Police Force (CRPF) are also part of the security cover. Confirming the incident, Additional DGP (Armed Police), M Shakeel Akther said the constable has been relieved from service.

Akther was quoted in the HT report saying that after the authorities recieved a tip-off, searches were carried out in the prison cells. The probe resulted in the seizure of cell phones from some of the inmates on the highly-guarded prison. “We zeroed on the constable and he confessed to the offence. The constable has been summarily dismissed from service under Article 311 of the Constitution,” Akther said. However, further investigation into the matter is currently underway.  “He has not been remanded and it is not required. Further action will be taken after the inquiry,” Akther added.

The Mandoli prison complex, built to reduce the pressure on Tihar and Rohini prisons, has advanced security features. According to a TSP official, the dismissed cop’s mobile phone conversations reveal that he was operating for quite some time. The report states that, the constable who had made his colleagues  believe that he doesn’t know Hindi, was seen speaking the language fluently in the tapes.