Two Years of Bhupesh Baghel Govt: Why Chhattisgarh Is The State to Watch Out For Industrial Investment

To draw investment in labour intensive sectors, the Chhattisgarh government introduced a new industrial policy, providing a special incentive package for investment in ultra-mega projects of sponge iron and steel sector. An official statement claimed that nearly 27 lakh tons of steel were produced in the state, making it the highest in the country, despite the COVID-19 crisis. 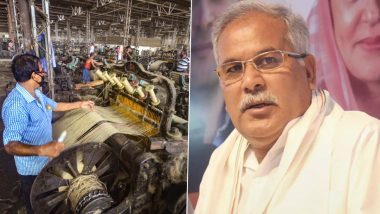 Raipur, December 2: The Bhupesh Baghel-led Congress government is set to complete two years in Chhattisgarh. In 2018, the electorate of India's central state had recorded an overwhelming mandate to replace the incumbent regime that was in place for the preceding 15 years. Baghel, who took over as the Chief Minister of the "young state", had resolved to ramp up industrial investments and create jobs for the youth. 24 months down the line, here's why Chhattisgarh has emerged as a state to watch out for industrial investment.

To draw investment in labour intensive sectors, the Chhattisgarh government recently introduced a new industrial policy that provides special incentive package for investment in ultra-mega projects of sponge iron and steel sector. An official statement claimed that nearly 27 lakh tons of steel were produced in the state, making it the highest in the country, despite the COVID-19 induced lockdown. Chhattisgarh: How The Bhupesh Baghel Government Worked For Health And Education Sectors in The State Over Past 2 Years.

The region-wise subsidy limit has been increased from 60 per cent to 150 per cent for industries of the sponge iron and steel sector and investment incentive of maximum Rs 500 crore (Rs 1,000 crore for Bastar) will be valid under this initiative. The proposed units will have to start production by October 31, 2024, to avail this.

Likewise, financial investment incentive will be provided to those new units, which have started commercial production after investing Rs 100 crore in the permanent capital investment fund. Industries of the core sector across the state have also been made eligible for subsidised electricity supply by the state government.

Chhattisgarh government played a key role in seeking Centre's approval for setting up ethanol plants in the state. CM Baghel pushed for ethanol-based industries as data pointed out that the state produced a surplus of paddy, which can be converted into ethanol.

“On how to utilize surplus paddy led to thinking on converting it into ethanol after testing in the state and other parts of the country. As inter-ministerial permission was required, personal meetings and communications with Central government ministries were done. Finally, when permission was granted, the issue of rate cropped up. Now, it has been fixed as Rs 54 per litre. The total credit goes to Chhattisgarh, which no one can claim,” Baghel said last month.

As part of the ease of doing business campaign, the Chhattisgarh government introduced an effective single-window clearance system. The move has not only catalysed the process of seeking clearances making statutory payments, but also led to complete transparency.

Empowering the investors, the single window system enables faster B2G information flow, real time B2G interactions and simplifies the application process for clearances and incentives. The portal allows the investors to obtain e-certificates of their registrations and payments, and also to track real time updates on their applications and grievances.

In addition to the above factors, a stable and visionary leadership in the state has also played a role in expediting the pace of development. Baghel, 59, has reiterated that his primary goal is to "agriculturally and industrially develop Chhattisgarh" throughout his tenure.

(The above story first appeared on LatestLY on Dec 02, 2020 02:35 PM IST. For more news and updates on politics, world, sports, entertainment and lifestyle, log on to our website latestly.com).