'Unbecoming of Indian Woman to Sleep After Being Ravished', Says Karnataka High Court While Granting Anticipatory Bail to Rape Accused 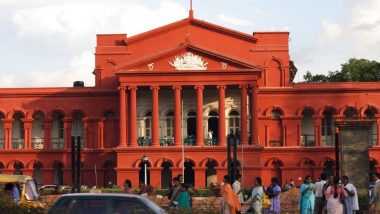 Bengaluru, June 25: While granting anticipatory bail to an accused, the Karnataka High Court made a baffling remark and said it was "unbecoming of an Indian woman" to sleep after being raped. The Karnataka High Court also held that the complainant failed to explain why she went to the office at 11 in the night, drank with the accused and also allowed him to stay the night with her. The accused was an employee of the alleged victim. What Is Sexual Consent and Why Is It the Most Important Factor While Having An Intimate Relationship.

"The explanation offered by the complainant that after the perpetration of the act she was tired and fell asleep, is unbecoming of an Indian woman; that is not the way our women react when they are ravished," Justice Krishna S Dixit asserted. The victim alleged that the accused had developed sexual relations with her on the false pretext of marriage and raped her once. Justice Dixit, however, said her allegations were a "bit difficult to believe". Sex on False Promise of Marriage Does Not Amount to Rape: Orissa High Court.

"Nothing is mentioned by the complainant as to why she went to her office at night i.e., 11.00 p.m.; she has also not objected to consuming drinks with the petitioner and allowing him to stay with her till morning," Justice Dixit said. One of the reasons cited by the judge for granting anticipatory bail was that the accused was in the complainants's employment for the last two years but she never complained earlier.

"The version of the complainant that she had been to Indraprastha Hotel for dinner and that the petitioner having consumed drinks came and sat in the car, even if is assumed to be true, there is no explanation offered for not alerting the police or the public about the conduct of the petitioner," the judge noted. He also questioned why the victim delayed filing a complaint or did not approach the court when the accused was allegedly forcing her for sexual favours.

(The above story first appeared on LatestLY on Jun 25, 2020 04:08 PM IST. For more news and updates on politics, world, sports, entertainment and lifestyle, log on to our website latestly.com).