Twelve members of the Tablighi Jamaat have now been acquitted of all charges by the chief judicial magistrate of Bareilly. Fifteen months ago, they were booked for 'negligence' and 'disobedience" of Covid norms. 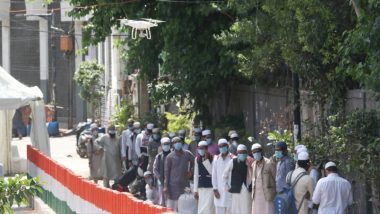 Bareilly, August 29: Twelve members of the Tablighi Jamaat have now been acquitted of all charges by the chief judicial magistrate of Bareilly. Fifteen months ago, they were booked for 'negligence' and 'disobedience" of Covid norms. Among those acquitted are nine Thai nationals, their two translators and a caretaker of the mosque in Shahjahanpur where they were living after attending the Jamaat congregation in Delhi.

The Thai nationals have been allowed to return to their home. Milan Gupta, counsel for the Jamaat members said that the order was passed verbally on Saturday. "The judgment copy is not delivered instantly on acquittal. We have applied for it and it should be available after the court opens on Tuesday." Tablighi Jamaat Congregation: Delhi High Court Directs Police to Hand Over Keys of Residential Portion of Nizamuddin Markaz to Occupants.

In early March last year, thousands of people gathered at the Nizamuddin Markaz (centre) of Tablighi Jamaat. The ministry of home affairs put the figure of members and primary contacts at 9,000. The centre later said 2,300 foreign nationals had participated in the event. The congregation ended by March 15, 2020, after which the Centre announced a lockdown.

Foreign nationals could not leave the country and stayed on. Among them were the nine Thai nationals, who went to Shahjahanpur and put up at a mosque along with their two translators Hussain Ahmad and Abdul Sardar M.S. (both of whom were from Tamil Nadu).

The Thai nationals were also, separately, booked under Section 14 of The Foreigners Act (violating visa rules). While they were in jail, their case went to the Allahabad high court which, in November, granted them bail. However, the charges had not been dropped, the passports of the nine Thai nationals were with the police and they could not leave the country and continued staying at the mosque.

(The above story first appeared on LatestLY on Aug 29, 2021 10:56 AM IST. For more news and updates on politics, world, sports, entertainment and lifestyle, log on to our website latestly.com).