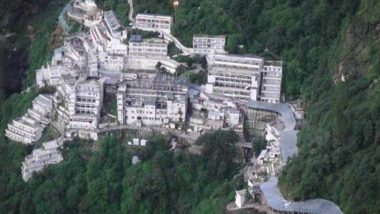 Katra, April 4: A high alert was sounded on Thursday in the Jammu region after the suspicious movement was reported. According to reports, two suspected militants were spotted near Shri Mata Vaishno Devi Katra railway station. Security in and around Vaishno Devi shrine and adjoining areas has been increased following inputs about suspicious movement in the area.

According to reports, check posts have been installed in various places. State police have started patrolling for area dominations at high ridges. A search operation has been launched after the suspicious movement was detected. Mata Vaishno Devi-Bhairon Mandir Ropeway Inaugurated! Now Complete Hour Long Journey in Just 3 Minutes.

Maa Vaishno Devi, also known as Mata Rani, and Vaishnavi, is a hill shrine of Hindu goddess Mata Adi Shakti, also known as Mahalakshmi. The temple is located in Katra at the Trikuta Mountains in Jammu and Kashmir.

(The above story first appeared on LatestLY on Apr 04, 2019 01:35 PM IST. For more news and updates on politics, world, sports, entertainment and lifestyle, log on to our website latestly.com).