In a shocking incident of human rights violation, police officials on Friday beaten up the differently-abled people who took up the streets of Guwahati in support of their various demands. 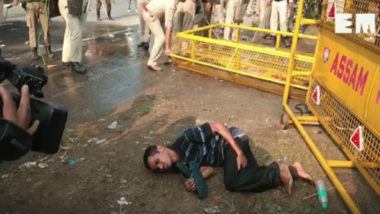 Guwahati, October 5: In an incident of human rights violation, several differently-abled protesters were brutally thrashed by cops on the streets of Guwahati. The protesters had taken to streets over their long-pending demands, during which many of them received injuries on head, back, hand and leg when they were mercilessly beaten by the cops. Around 1200 protestors under the banner of the Pratibandhi Suraksha Sangstha-which works for the person with disabilities, hit the streets of Dispur demanding to fill up the vacant posts which were meant for the person with disabilities, reported Northeast Now.

The key demands of the protest were to fill 4,419 vacant posts reserved for the differently abled people. The second demand was to get financial assistance from the government, which they promised earlier, also with another 21 demands which they have submitted to the government from time to time. UP Police Constable Sodomizes Minor for Several Days at Police Station, Suspended.

General secretary of Pratibandhi Suraksha Sangstha Nripen Malakar also received serious injuries on Hand and chin, while another specially-abled Amrit became a victim of police brutality which left his hand fractured. Malakar alleged that police after the cruelty didn't even bother to help specially-abled people to take them to the hospital. Police Constable Asks For Leave to 'Expand Family' and Gets it.

Earlier, the Social Welfare Minister Pramila Rani Brahma said that efforts will be made to fill vacant government posts for differently-abled. Responding to the minister's assistance, Malakar said that no efforts were taken and the recruitment drive has not started even after several meetings.

(The above story first appeared on LatestLY on Oct 05, 2018 11:23 PM IST. For more news and updates on politics, world, sports, entertainment and lifestyle, log on to our website latestly.com).