Weather Forecast: No Respite From Heatwave in Northwest India For Next Two Days, More Rain Likely in Parts of Tamil Nadu And Kerala 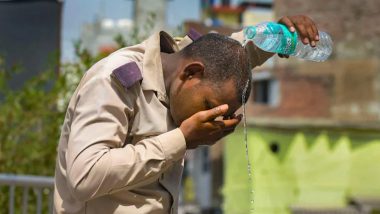 Severe heatwave conditions are likely over Rajasthan during the next four days. Accordingly, India Meteorological Department (IMD) has placed an orange warning over the entire Rajsthan for Monday.

As per the forecast by the Indian Meteorological Department (IMD), the heatwave conditions are likely to sustain in Northwest India, Madhya Pradesh and Vidarbha for a few more days. However, IMD has forecast slight relief in the temperature from April 12.

According to IMD's latest forecast, "Heatwave spell likely to continue over Northwest India, Madhya Pradesh and Vidarbha, during the next five days with a slight reduction from April 12, 2022."  Weather Forecast: Delhi To Witness Severe Heatwave on April 9-10, Says IMD After National Capital Sizzles Above 40 Degrees

The maximum temperatures were above normal by 6-10 degrees Celsius in most parts of Himachal Pradesh, Punjab, Haryana, Delhi and many parts of west Rajasthan in the last 24 hours.

Delhi recorded the hottest day in five years on Saturday (April 9) when the mercury touched 42.4 degrees Celsius. In 2017, the national capital recorded a maximum temperature of 43.2 degrees Celsius on April 21.  Weather To Remain Clear in Jammu and Kashmir, Ladakh During Next 24 Hours: MeT Department

While the heatwave is likely to continue, the IMD has predicted rainfall for some parts of India, as well as a drop in temperature for other areas.

With the arrival of a fresh Western Disturbance on Tuesday, the temperatures are expected to come down.

As per the IMD, under the influence of the western disturbance, maximum temperatures are likely to fall by 2-3 degrees Celsius over many parts of Northwest India.

(The above story first appeared on LatestLY on Apr 11, 2022 10:34 AM IST. For more news and updates on politics, world, sports, entertainment and lifestyle, log on to our website latestly.com).