Amit Shah to be Home Minister? PM Narendra Modi May Induct New Faces in Union Cabinet; Here's Who May Make It to The List 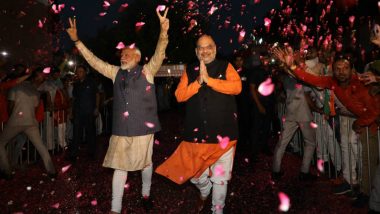 New Delhi, May 24: Prime Minister Narendra Modi will have to induct fresh faces in his council of ministers as some of the present members of the Cabinet are either retiring from politics due to health factor or would be replaced by young turks. Bharatiya Janata Party (BJP) chief Amit Shah is likely to join the Cabinet in this term. Shah may replace Rajnath Singh as Home Minister.

External Affairs Minister Sushma Swaraj may opt out as she is not in the best of health. If Swaraj decides to continue, she will have to become a Rajya Sabha member. The external affairs portfolio may be handed over to Nirmala Sitharaman and Rajnath Singh may move to the defence ministry. Like Swaraj, Finance Minister Arun Jaitley, too, is suffering from a prolonged illness. Modi Factor And More, Here's What Worked For BJP in Lok Sabha Elections 2019.

If Jaitley hangs his boots, Railways Minister Piyush Goyal may step into his shoes. Goyal served as the interim finance minister when Jaitley was undergoing treatment. Nitin Gadkari, who handled several ministries and is credited most tangible work being done in those departments, will continue to oversee the present portfolios. Law Minister Ravi Shankar Prasad, who won from Patna Sahib, is likely to get a more prominent ministry. Lok Sabha Election Results 2019: Five Reasons Behind Congress' Crushing Defeat at Hands of PM Modi-Led BJP.

Smriti Irani, who emerged as a star by defeating Rahul Gandi in Congress's bastion Amethi, is set to be promoted in the Cabinet. Irani was removed from the high-profile HRD ministry after the JNU and Rohith Vemula controversies. She was then given the Information and Broadcasting Ministry and Textile Ministry. She was left with the Textile Ministry after Rajyavardhan Rathore took independent charge of the I&B Ministry following Cabinet reshuffle.

Minority Affairs Minister Mukhtar Abbas Naqvi, a prominent Muslim face of the BJP, get a cabinet rank this time. Other leaders who may get a berth in the next Cabinet include Prakash Javadekar, Sunil Prabhu, JP Nadda and Dharmendra Pradhan. The BJP has attained a full majority in Lok Sabha after winning over 300 seats in parliamentary elections.

(The above story first appeared on LatestLY on May 24, 2019 01:06 PM IST. For more news and updates on politics, world, sports, entertainment and lifestyle, log on to our website latestly.com).