Congress-DMK Is an Alliance of Corruption and Dynastic Politics: Amit Shah 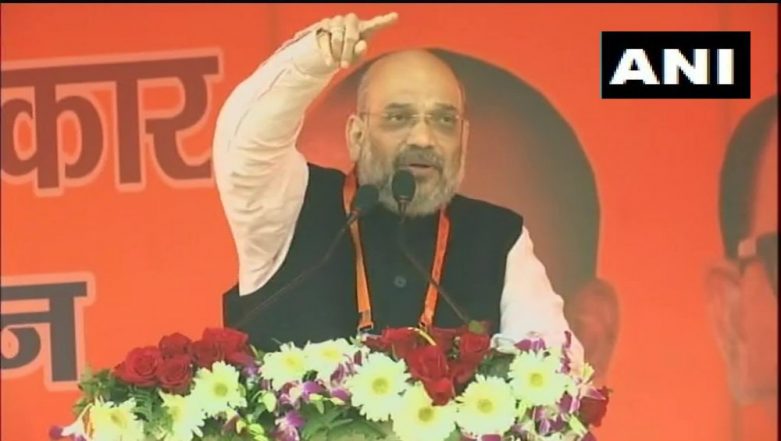 Shah said only the BJP party is known by its cadres and not by its leaders. He said the BJP does not win elections by its leaders alone but by the hard work of the party cadres. The nationwide mood is to re-elect Narendra Modi as the Prime Minister, he said. Lok Sabha Elections 2019: Amit Shah Takes Swipe at Priyanka Gandhi’s Entry in Active Politics, Says ‘Brother Not Married, So Sister Has Come’.

Amit Shah said there are two types of political philosophies that exist in the country now - the Rahul Gandhi-led Congress and DMK alliance and the National Democratic Alliance (NDA) under Modi. "I ask (DMK President M.K.) Stalin, you were a part of the Central government for 10 years. What did you do?" Shah asked and answered the DMK was involved in scams. Lok Sabha Elections 2019 ‘Battle of Ideologies’, Says BJP President Amit Shah.

The United Progressive Alliance (UPA) government, during its 10-year rule, wrote off farm loans worth Rs 53,000 crore whereas the Modi government has announced the farmers income scheme whereby they will get Rs 750,000 crore in 10 years time, Shah said. "The Modi government gave huge relief to the small- and medium-sized enterprises by increasing the exemption from the ambit of Goods and Services Tax (GST)."

The BJP President also listed out the various projects and the amount sanctioned by the Central government. He said the BJP government is moving ahead with the vision of corporate social responsibility (CSR). For DMK, the term CSR means "corruption scam raj".