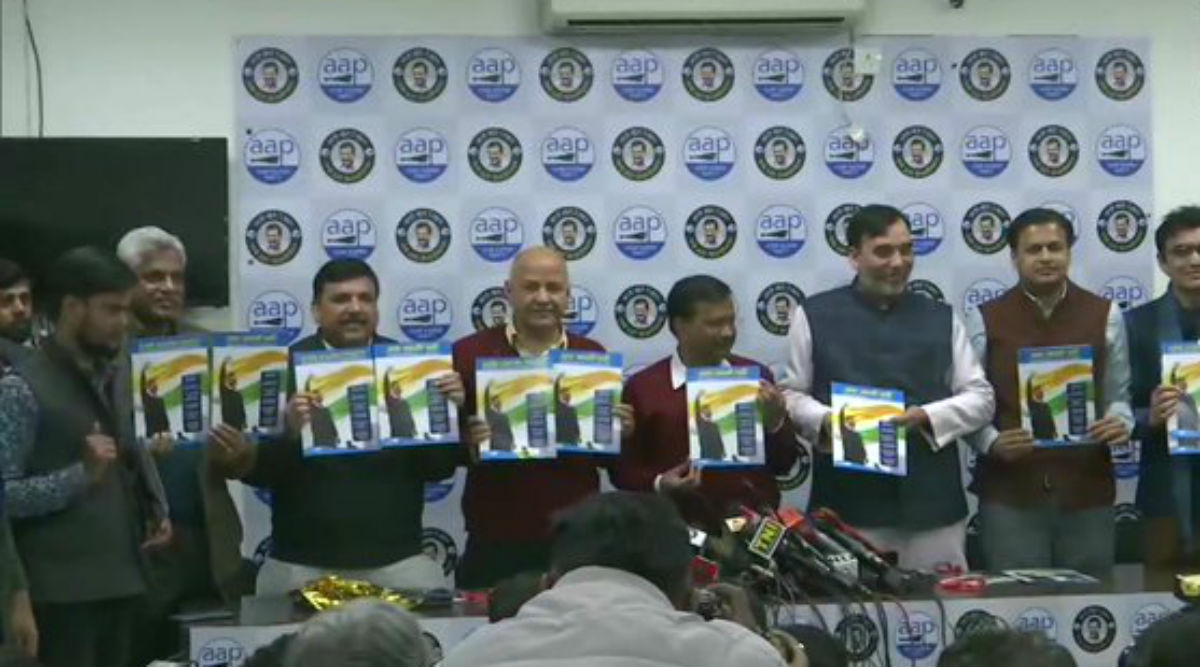 New Delhi, February 4: The Aam Aadmi Party (AAP) released its manifesto for the February 8 Delhi assembly elections on Tuesday, making a slew of promises for various sectors and sections of the society. In its manifesto, the AAP said that if voted to power, it will implement a scheme under which ration will be delivered at doorsteps of people. On Jan Lokpal Bill and Delhi Swaraj Bill, Delhi Deputy Chief Minister Manish Sisodia said AAP will continue its struggle to get the two legislations passed from the central government. Delhi Assembly Elections 2020: Hits And Misses of Arvind Kejriwal's AAP.

"The Delhi Jan Lokpal Bill which was passed in Delhi Vidhan Sabha in 2015, has been pending with the Central Government for the last 4 years. The AAP government will continue its struggle to get the Bill passed," Sisodia told a press conference. Sisodia also said that the AAP, if voted to power, will introduce "Deshbhakti curriculum" in schools on lines of "Happiness curriculum". Taking a cue from the Maharashtra government, the AAP also promised to allow commercial markets to open 24 hours on all seven days of the week. Delhi Assembly Elections 2020: Where Are CCTVs And Wifi, BJP Chief Jagat Prakash Nadda Asks Arvind Kejriwal.

The 28-point programme of the AAP also includes pursuing the central government for the inclusion of Bhojpuri into the 8th Schedule of the Constitution. The AAP promised new appointment of Safai Karamcharis in the city and Rs 1 crore compensation to families of decreased Safai Karamcharis who die while performing their duty. Listing out promises, Sisodia took a dig at Union Home Minister Amit Shah and said: "We are giving guarantees, not jumlas."

After releasing the manifesto, Arvind Kejriwal said that people of Delhi wanted to know chief ministerial candidate of the Bharatiya Janata Party (BJP). "Delhiites want BJP to declare its CM candidate. Whoever that be, I am ready for a debate with him," Kejriwal said.