As Khadse completes the much-awaited switch to the NCP, here's a look at the career of BJP's erstwhile Maharashtra face. Born in Muktainagar village of North Maharashtra in 1952, Khadse emerged as a strong voice of the region. He represented the Leva Patil community, which is considered is influential in the belt of state bordering Madhya Pradesh and Gujarat. 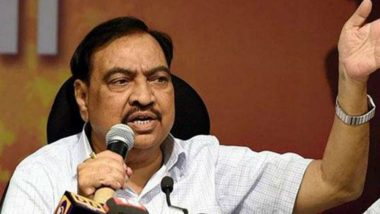 Mumbai, October 23: Four years after he began sulking, former state cabinet minister Eknath Khadse has finally left the Bharatiya Janata Party (BJP) and switched to the rival Nationalist Congress Party (NCP). He formally joined the Sharad Pawar-led group on Friday, in what was earlier planned as a show of strength but confined to a sombre joining ceremony in view of the COVID-19 pandemic. Eknath Khadse Resigns From BJP After Four Decades of Association.

As Khadse completes the much-awaited switch to the NCP, here's a look at the career of BJP's erstwhile Maharashtra face. Born in Muktainagar village of North Maharashtra in 1952, Khadse emerged as a strong voice of the region. He represents the Leva Patil community, which is considered influential in the belt of state bordering Madhya Pradesh and Gujarat.

Khadse made his early forays into politics as a worker of the Jana Sangh, the predecessor of the BJP. He was also closely associated with the Rashtriya Swayamsevak Sangh (RSS), the ideological parent of the saffron party.

Khadse turned into a significant player of the state politics in the mid-1980s, when he took upon the task to establish the BJP in North Maharashtra. He was elected as an MLA from the Muktainagar constituency in 1989, and went on to represent the seat consecutively till 2019.

In the 1995-1999 BJP-Shiv Sena government, he served as the Minister for Irrigation and Finance. Between 2009-14, he was the Leader of Opposition in the Maharashtra Assembly. While speculations were rife that he would be the Chief Minister if the Sena-BJP coalition returns to power in 2014, the party top brass decided to appoint Devendra Fadnavis as the CM.

Khadse's career went downhill in 2016, after corruption allegations were levelled against him. Amid the accusations, he resigned as the Minister for Revenue. In the next couple of years, he was further sidelined by the party -- to the extent where he was not issued a ticket in the 2019 polls despite representing Muktainagar seat for 30 consecutive years.

In the assembly polls held last year, Khadse's daughter Rohini Khadse was issued the ticket by the BJP, but she lost to Shiv Sena's Chandrakant Nimba Patil in a closely contested battle by merely 1,987 votes.

Khadse, since being dropped from the BJP list of candidates, had accused party leaders Devendra Fadnavis and Girish Mahajan of conspiring against him. His angst against the former was reflected in the statement issued to reporters on Wednesday, as he said: "Fadnavis destroyed my life".

(The above story first appeared on LatestLY on Oct 23, 2020 04:27 PM IST. For more news and updates on politics, world, sports, entertainment and lifestyle, log on to our website latestly.com).