FORGIVE US Shashi Tharoor, Your Stance on Entry of Women in Sabarimala Smells of Political Opportunism

Usually liberal, Shashi Tharoor makes an uncharacteristic deviation in the Sabarimala issue of women's entry. Why? 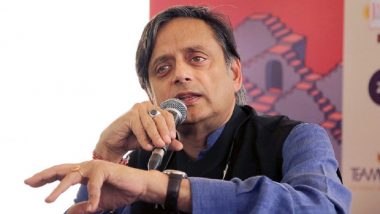 Dear Shashi Tharoor, I never been a keen follower of your political career. But I was always in awe of your intellect, your vision, your much-envied eloquence and your capacity for self-parody. As an Indian accustomed to seeing boorish politicians, you embodied certain aspirational qualities we’d have loved to see in our leaders – educated, suave, articulate and charismatic. Also, it’s tough to find a politician who serves as a voice of reason in this Great Indian circus of Indian Rajneeti and to me and many others, it was you. So imagine our horror when we read your sorry-but-not-sorry-esque piece in The Print, where you told off liberals for supporting women’s entry into Sabarimala. This coming from a confessed liberal like you, it was disappointing, to say the least.

For someone who has been a liberal all along – standing by Shah Bano, defending Rushdie and Nasreen, condemning Babri Masjid demolition and supporting MF Husain’s creative freedom – such an uncharacteristic deviation appears suspicious. What changed? Why did you turn tail when we liberals needed your voice of reason the most?

You spoke to CNN-News18, saying that the entry of women into the Ayyappa temple was “an unnecessary, provocative act.” Some netizens reminded you that it was these very provocative acts that changed the course of history and that brave ones have always been disrupting the status quo to bring positive change. History of Sabarimala: Why Women Weren't Allowed Into The Lord Ayyappa Shrine.

In an earlier article in The Print, you also mentioned that Article 14, promoting equality, and Article 25, promoting religious freedom are at loggerheads in the Sabarimala issue. You emphatically stated that while you favour gender equality, you also believe in the “rights of religious adherents to follow their beliefs and practices, so long as they do no harm to others.” Sabarimala Temple Row Rages in Kerala After 2 Women Entered Premises; Violent Protests, 'Black Day' Witnessed In State, CM Blames RSS.

This baffles me. How did you assumed that the women who wish to pray at Sabarimala are not religious adherents? You also assumed that women who want to visit the temple are not going out of belief but out of curiosity. That’s quite a broad brush you got there!

If you chose to support provocative minds like Husain and Rushdie then, why not support women’s entry into Sabarimala now?

One doesn’t have to squint too hard to see that there’s an obvious political agenda behind your uncharacteristic stance. Your party Congress have become strange bedfellows with the BJP on the Sabarimala issue. And why wouldn’t it? Congress will pull out all stops to stay relevant, now that there’s a hope of regaining power.

With your disappointing comment on women’s entry issue, it reinforces our belief that perhaps there’s no such a thing as integrity or principles in politics. So make no mistake Mr Tharoor. You are not an “instinctive liberal” as you claim to be.

(The above story first appeared on LatestLY on Jan 09, 2019 07:31 PM IST. For more news and updates on politics, world, sports, entertainment and lifestyle, log on to our website latestly.com).