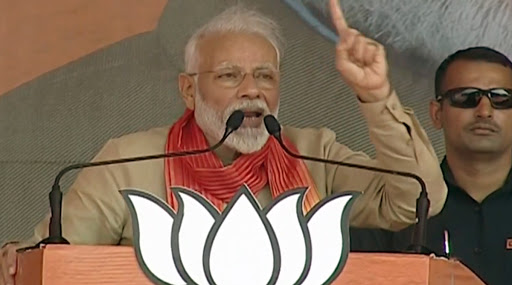 Chakri Dadri, October 15: Prime Minister Narendra Modi on Tuesday made a promise to the people of poll-bound Haryana that his government would ensure that the farmers share of water -- going to Pakistan -- would be stopped. He also stated this promised share of water had been denied to farmers of India and Haryana for the last 70 years.

Addressing an electoral rally in Haryana's Chakri Dadri on Tuesday, PM Modi said, "The share of water of the farmers of India and Haryana went to Pakistan for last 70 years. This Modi will stop this water. The right to this water belongs to India and the farmers of Haryana." Narendra Modi Says Soldiers Lost Lives Because of Congress' 'Love' For Article 370, Asserts Country Has Backed His Decision.

Apart from this, PM Modi thanked the people of Haryana for the success of 'Beti Padhao, Beti Bachao' campaign. He said, "Had the villages of Haryana not stepped forward then 'Beti Bachao, Beti Padhao' would not have been so widespread, effective and fruitful. Every person in Haryana says 'Mhari chhoriyaan chhoron se kam hain ke?'"

Hoping for a clean sweep in teh upcoming Assembly elections in Haryana, he stated that this time the state would celebrate two Diwali. He said, "We will have two types of Diwali this time. A 'diya' (earthen lamp) Diwali, and a 'kamal' (lotus) Diwali. We should dedicate this Diwali to our daughters and celebrate their achievements." The Assembly elections in Haryana would take place on October 21 and the counting of votes would take place on October 24.