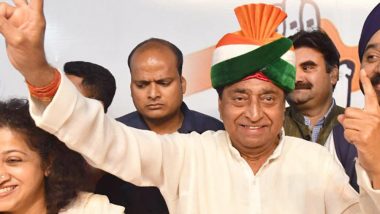 The apparently sexist remark of the Congress veteran came a couple of days after Devi accused him of bribing the MLAs when he was the Chief Minister. The former state minister, who switched ranks to the BJP after Jyotiraditya Scindia's rebellion, had told reporters on Thursday that Nath used to pay "Rs 5 lakh" to Congress MLAs who could not be granted ministerial posts.

Nath, without naming Devi, mounted a vicious attack on her while campaigning for the Congress candidate against her in Dabra. He also ended up saying "yeh kya item hai" in reference to her.

#WATCH: Our candidate is not like her... what's her name? (people shout Imarti Devi, who is former State Minister) You know her better and should have warned me earlier... ye kya item hai: Former Madhya Pradesh CM & Congress leader Kamal Nath pic.twitter.com/eW76f2z8gU

"Our candidate is not like her... what's her name?, who is former State Minister) You know her better and should have warned me earlier... ye kya item hai," Nath was reported as saying.

A total of 28 seats would be contested in the MP bypolls, scheduled on November 3. The elections were necessitated after the incumbent MLAs from these constituencies resigned and jumped ship to the BJP.

(The above story first appeared on LatestLY on Oct 18, 2020 06:15 PM IST. For more news and updates on politics, world, sports, entertainment and lifestyle, log on to our website latestly.com).