New Delhi, May 15: The Bharatiya Janata Party (BJP) has an advantage in the seventh phase of the Lok Sabha polls in Uttar Pradesh on Sunday as the caste and community arithmetic of the Mahagathbandhan (MGB) may not work in 9 out of 13 seats in the final round.

The BJP and ally had swept all these 13 eastern Uttar Pradesh seats in 2014. This year also, all eyes are on Varanasi from where Prime Minister Narendra Modi is seeking re-election. Lok Sabha Election Result 2019 Predictions by Satta Bazar: BJP May Win Over 240 Seats, Congress 80, Say Matka Players in MP, Rajasthan And Gujarat.

The spotlight is also on Gorakhpur, a seat BJP is keen to wrest from the Samajwadi Party (SP) after the setback in bypoll when Hindutva mascot Yogi Adityanath's stronghold fell to MGB, which made its experimental debut as an anti-BJP front in Uttar Pradesh.

Stakes are also high for the Congress as former Minister in Manmohan Singh's government R.P.N. Singh is giving a strong fight in Kushi Nagar on the Uttar Pradesh-Bihar border and journalist-turned-politician Supriya Shrinate is contesting from Maharajganj. 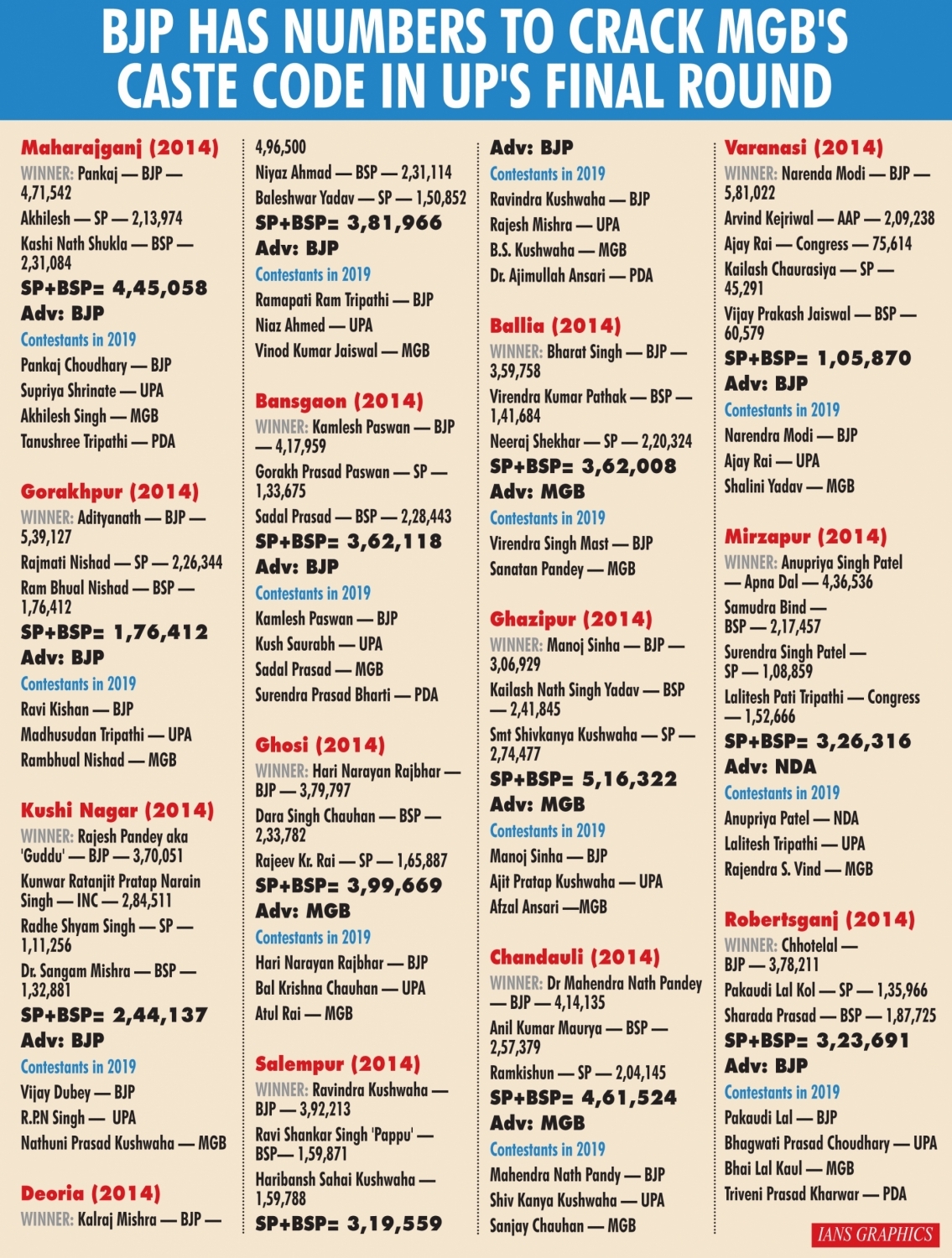 If votes polled by MGB constituents SP and Bahujan Samaj Party (BSP) in 2014 are taken into account, the combined vote share of its candidates exceeds that of the winning BJP contestant in only four of these 13 seats.

The seats where caste and community equation favours MGB are Ghosi, Ballia, Ghazipur and Chandauli. In the rest of the seats, the MGB falls short of the BJP by substantial margins. But there are some riders as well.

The combined vote share of the SP and BSP in Gorakhpur in 2014, when Yogi Adityanath won the seat by polling 5,39,127 votes, was much less than that of the BJP.

Adityanath had defeated Rajmati Nishad of SP, who got 2,26,344 votes and BSP's Ram Bhual Nishad (1,76,412). Yet the BJP lost the bypolls to Samajwadi Party's Praveen Nishad and the Yogi bastion was breached for the first time.

Praveen Nishad, however, is now with the BJP contesting from the Sant Kabir Nagar seat while Bhojpuri actor Ravi Kishan is carrying the BJP flag in Gorakhpur.

Also on test in this round is BJP's ally and Union Minister Anupriya Patel of Apna Dal from Mirzapur. She is up against Lalitesh Tripathi of the UPA and MGB candidate Rajendra S. Vind.

Another Union Minister and senior BJP leader Manoj Sinha, who almost missed the bus to become Chief Minister, is seeking re-election from Ghazipur while state party chief Mahendra Nath Pandey is contesting from Chandauli. The BJP is confident that the momentum is with Prime Minister Narendra Modi which will unsettle all the caste and community equations.