Madhepura is an assembly constituency in Madhepura district in the Indian state of Bihar. The Madhepura Vidhan Sabha will have its polls in the third phase of the Bihar assembly elections 2020. 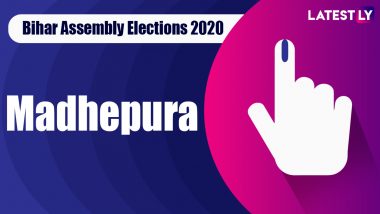 Bihar, November 5:  Madhepura is an assembly constituency in Madhepura district in the Indian state of Bihar. The Madhepura Vidhan Sabha will have its polls in the third phase of the Bihar assembly elections 2020. As per the Election Commission's schedule for the Bihar assembly elections, polling in 78 constituencies, will take place on November 7. Counting will take place on November 10 and results will also be declared on the same day.

The Bihar assembly elections 2020 is taking place in three phases this time. the dates are October 28, November 3 and November 7. The Bihar election is one of the biggest elections to be held globally during the COVID-19 pandemic. The term of Bihar assembly will end on November 29.

Voting will start from 7 am and will continue till 6 pm. This time, on account of the coronavirus pandemic one hour extra, has been added so that polling booths are not overcrowded. The last hour has been mainly kept for COVID-19 infected patients so that even they can cast their vote.  Motihari Vidhan Sabha Seat in Bihar Assembly Elections 2020: Candidates, MLA, Schedule And Result Date.

In the 2015 Bihar Assembly election, the Madhepura constituency was won by Chandra Shekhar of RJD, and Vijay Kumar Bimal of BJP was the runner-up. The contesting candidates from Madhepura constituency in 2020 are Chandra Shekhar from Rashtriya Janata Dal, Janata Dal United's Nikhil Mandal, Independent candidates Mandev Tanti, Shashi Kumar among others.

In 2015, Nitish Kumar became the chief minister forming an alliance with the Bharatiya Janata Party. This year, the BJP-JD(U) alliance is projected to win a comfortable majority in Bihar with 147 seats in the 243-member assembly, according to an opinion poll released by Times Now-CVoter.

(The above story first appeared on LatestLY on Nov 05, 2020 06:04 PM IST. For more news and updates on politics, world, sports, entertainment and lifestyle, log on to our website latestly.com).