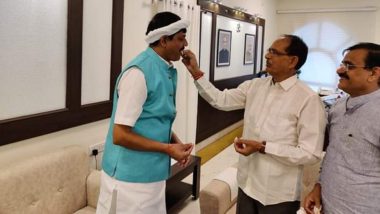 Bhopal, July 12: In a setback for the Madhya Pradesh Congress, its MLA Pradyuman Singh Lodhi resigned from the party as well as membership of the state Assembly and joined the BJP on Sunday.

Talking to reporters after joining the saffron party, Lodhi said, "I have resigned as MLA. My resignation has been accepted. Only the BJP can develop Bada Malhera Assembly constituency and the Bundelkhand region. The chief minister also approved developmental schemes for my area."

Before joining the party, Lodhi went to Chouhan's residence on Sunday morning. He also met senior BJP leader and former Union minister Uma Bharti, who in 2003 represented the Bada Malhera seat in the state Assembly.

He submitted the resignation on Saturday. I told him to reconsider it till Sunday. But, he again came to me today and requested to accept the resignation. So, his resignation has been accepted, he said. With this, the Congress's strength in the state Assembly has been reduced to 91.

In March this year, 22 Congress MLAs resigned from the Congress after former Union minister Jyotiraditya Scindia quit the party and joined the BJP, resulting in the fall of the Kamal Nath-led Madhya Pradesh government.

On March 23, Chouhan took oath as chief minister for a record fourth term.

Following the resignation of 23 members and death of two sitting legislators, the effective strength of the 230- member state Assembly at present is 205.

The BJP currently has 107 MLAs in the state Assembly. Besides, the House also has four Independent MLAs, two of the Bahujan Samaj Party (BSP) and one of the Samajwadi Party (SP).