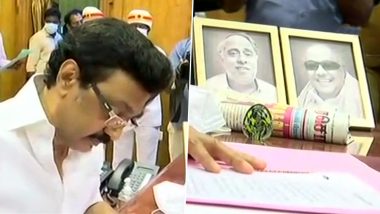 Chennai, May 7: Soon after taking oath as Tamil Nadu Chief Minister, DMK leader MK Stalin on Friday signed five key orders. MK Stalin announced Rs 4000 COVID-19 financial assistance for over two crore rice card holders in the state. The first installment of Rs 2000 will be provided in this month. As Tamil Nadu Chief Minister, Stalin put his first signature to provide COVID-19 financial aid. The DMK had promised in its poll manifesto payment of Rs 4,000 as relief for poor affected by the pandemic. MK Stalin Turns Emotional While Paying Tributes to His Father M Karunanidhi After Taking Oath As Tamil Nadu CM.

Fulfilling another promise, Stalin announced that the Tamil Nadu government will bear the cost of treatment of COVID-19 patients in all government and private hospitals in the state. The expenses will be covered under Chief Minister's Health Insurance Scheme. The newly sworn-in Chief Minister also passed an order to cut Aavin milk price by Rs 3 per litre from May 16.

In a relief to women, Stalin passed an order to

make ordinary bus rides free for female passengers from May 8. The government will pay Rs 1,200 crore to the transport corporations as subsidy. He also announced that an IAS officer will be appointed to address public grievances in 100 days. Stalin had collected the petitions promising that within 100 days the issues would be solved.

Earlier today, Stalin was sworn in as the Chief Minister of Tamil Nadu by Governor Banwarilal Purohit at Raj Bhawan. Apart from Stalin, 33 other legislators took oath as ministers. Stalin's cabinet has two women ministers. The Chief Minister's son Udhayanidhi Stalin who has won from Chepauk-Thiruvallikeni constituency is not included in the cabinet.

(The above story first appeared on LatestLY on May 07, 2021 01:42 PM IST. For more news and updates on politics, world, sports, entertainment and lifestyle, log on to our website latestly.com).