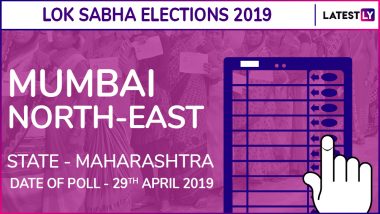 Mumbai, March 24: BJP candidate Manoj Kishorbhai Kotak won Lok Sabha election from Mumbai North-East parliamentary seat in Maharashtra. Polling for Lok Sabha election in Mumbai North-East parliamentary seat in Maharashtra was held on April 29 in the fourth phase of general elections. The constituency assumes significance as it has become a reason for a rift between the Bharatiya Janata Party (BJP) and its ally Shiv Sena.

In 2014 Lok Sabha polls, the BJP-Shiv Sena-Swabhiman Paksha combine together won 42 out of the 48 seats in Maharashtra. The Congress bagged only two seats and NCP just four with several senior leaders of both the parties losing their seats. Lok Sabha elections are scheduled to be held in seven phases - on April 11, April 18, April 23, April 29, May 6, May 12 and May 19.

(The above story first appeared on LatestLY on May 23, 2019 08:22 PM IST. For more news and updates on politics, world, sports, entertainment and lifestyle, log on to our website latestly.com).