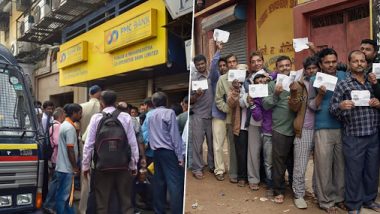 Mumbai, October 4: The Assembly Elections in Maharashtra are just a few weeks away, and the recent alleged Rs 6,500 crore scam of Punjab and Maharashtra Cooperative (PMC) Bank may create an adverse impact on it. Though the Mumbai Police Economic Offence Wing arrested suspended PMC Bank bank Managing Director Joy Thomas, and Housing Development Infrastructure Limited (HDIL) Directors Sarang Wadhawan and Rakesh Wadhawan for alleged involvement; waves might turn upside down. Depositors have sought access to their money with placards saying -- "No Solution, No Vote".

Asking both the Union and State government to solve the ongoing PMC crisis, the voters in Mumbai and other places -- the account holders of PMC Bank -- have threatened to boycott the upcoming Assembly elections. Reports even claim that people from various places of Mumbai have launched a campaign to boycott the polls. People of at least three residential complexes in the western suburbs of Jogeshwari-Vikhroli Link Road have come up with posters with the message -- 'No Solution, No Vote'. PMC Bank Crisis: Joy Thomas, Suspended Managing Director, Arrested by Mumbai Police Economic Offence Wing.

According to an estimate, irregularities, and misreporting of loans given to real estate developer HDIL amounts to Rs 6,500 crore of its total loan book of Rs 8,880 crore. Though the loan was considered as a non-performing asset (NPA) for the past two-three years, Thomas has allegedly stated that he hid this scene to avoid damage to the reputation of the PMC Bank.

Following the chaos and escalating tensions over the transaction limit for account holders, Reserve bank on Thursday raised the bar to Rs 25,000 and indicated that the situation would be revised once everything calms down. However, Mumbai Police EOW had also frozen the account of HDIL owners tuning to the amount of Rs 3,600 crore. PMC Bank Crisis: Mumbai Police Economic Offence Wing Arrests HDIL Directors Sarang Wadhawan and Rakesh Wadhawan, Freezes Rs 3,600 Crore.

On Friday, EOW of Mumbai Police conducted raids at six locations in Mumbai and adjoining areas before arresting Joy Thomas. The EOW took action against Thomas and others in the alleged PMC Bank scam under the Prevention of Money Laundering Act. The Enforcement Directorate too filed the case and conducted joint raids were conducted, aiming at gathering additional evidence. PMC Bank Crisis: RBI Increases Withdrawal Limit to Rs 25,000.

Apart from this, The PMC Bank has been barred from granting or renewing loans and advances, making any investments, incurring any liability, including borrowal of funds or accepting fresh deposits, among others, without the prior written approval from RBI. Founded in 1984, the PMC Bank has branches in Maharashtra, Delhi, Karnataka, Goa, Gujarat, Andhra Pradesh and Madhya Pradesh.

(The above story first appeared on LatestLY on Oct 04, 2019 08:18 PM IST. For more news and updates on politics, world, sports, entertainment and lifestyle, log on to our website latestly.com).