Rajasthan BJP Leader Rajendra Rathore Hits Back at MLA Ramkesh Meena, Says, ‘If Pilot Is an Outsider in Raj, What About Sonia and Manmohan’

After an independent MLA from Chief Minister Ashok Gehlot's camp, Ramkesh Meena termed former deputy CM Sachin Pilot as an outsider in Rajasthan, the State BJP on Wednesday brought up the issue of the status of Congress president Sonia Gandhi and former Prime Minister Manmohan Singh. 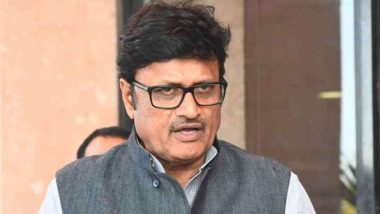 Attacking the Congress, it raised questions on Sonia Gandhi and Manmohan Singh saying both of them were born outside India.  Sachin Pilot vs Ashok Gehlot: Congress Leader Summoned in Rajasthan Phone Tapping Case

In his tweet, Deputy Leader of Opposition Rajendra Rathore said, "After all, Ramkesh Meena, close to CM Ashok Gehlot, has spoken what is going in the mind of his chief. According to his statement, Sachin Pilot is an outsider. But then, Congress's supreme leader Sonia Gandhi is originally from Italy. Former Prime Minister Manmohan Singh was born in Pakistan. Along with this, the most influential leader of Congress, Rajya Sabha MP from Rajasthan KC Venugopal is originally from Kerala. When Pilot is an outsider, then who are these influential leaders of Congress? What would you say about them. Just clarify your point," he said.

(The above story first appeared on LatestLY on Jun 23, 2021 07:31 PM IST. For more news and updates on politics, world, sports, entertainment and lifestyle, log on to our website latestly.com).