The students were demonstrating outside the UP Vidhan Sabha as the Allahabad High Court on Thursday struck down the appointment of 68,500 teachers earlier this year, citing alleged corruption. 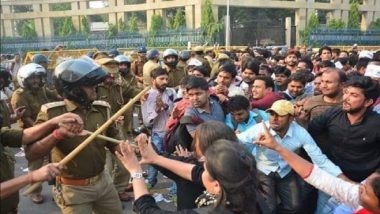 UP police controlling the protesting students outside the Vidhan Sabha | (Photo Credits: Twitter/@RahulGandhi)

Accusing the BJP government of being marred in the alleged teacher recruitment scam, Gandhi claimed that the police assault was a message to the student populace to refrain from dissent. High Court Directs State Government to Submit Report on the Appointment 'Scam'.

"You had promised 2 crore jobs, but even the students who are demanding a transparent recruitment of 68,500 teachers are being beaten up," the Congress chief said on social media.

The students were demonstrating outside the UP Vidhan Sabha as the Allahabad High Court on Thursday struck down the appointment of 68,500 teachers earlier this year. The bench, headed by Justice Irshad Ali, said there is sufficient preliminary evidence which hints at massive corruption.

The court has ordered the Central Bureau of Investigation (CBI) to probe the irregularities and submit a report by November 26.

According to the UP police, the protesting students were crossing the security barricade outside the assembly which compelled them to take crowd-controlling measures. The police, however, denied launching a baton-charge on the protesters.

The students refuted the police's claims and posted photographs of injuries incurred by them in the lathicharge. A stampede also broke out after the police began using force, which led to traffic snarls on arterial road near Hazratganj.

(The above story first appeared on LatestLY on Nov 03, 2018 03:47 PM IST. For more news and updates on politics, world, sports, entertainment and lifestyle, log on to our website latestly.com).