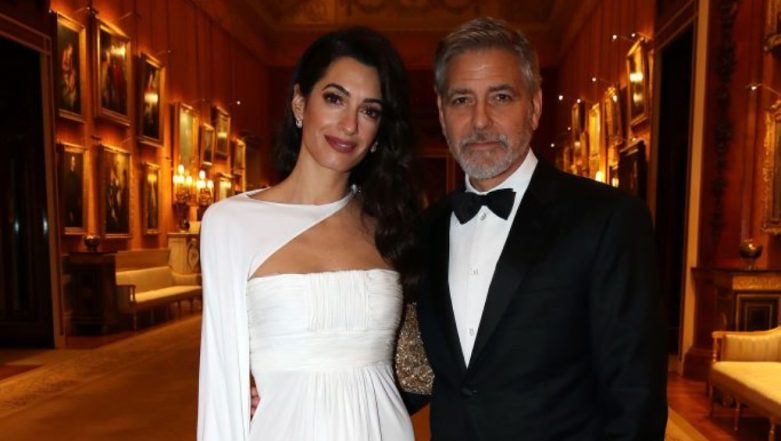 Amal Clooney and George Clooney may not directly be heirs to some royal families but they sure defy all the usual genetic norms to belong in royalty. 41-year-old Amal constantly makes women feel inferior with her age-defying beauty and panache. Could such a person even exist? Well, believe it or not, she is very much real! And she continues to floor fashion critics with her impeccable choices.

At the recent charitable dinner held by Prince Charles in the Queen of England's residence, Buckingham Palace, Amal and George were present matching with the air of the royalty. For the evening party, Mrs Clooney opted for a white empire gown with a silky and asymmetrical sleeve. The cape that flowed in the form of a sleeve was encrusted with gold beading which further amplified the golden glow of the gown. To match his fashionable wife, George Clooney chose a simple but dapper black and white tuxedo with a bow tie. Check out their pictures below.

The dinner party also had Luke Evans, Benedict Cumberbatch, Chiwetel Ejiofor, Tamsin Egerton and Josh Hartnett in attendance. Despite it being a royal event, Meghan Markle was not present at the party. Sadly, Amal couldn't exchange mommy-expert notes and Meghan at the party. However, a source revealed to Hollywoodlife.com, “Meghan’s friends are spread out all over the world, but that hasn’t stopped them from offering heaps of support through her whole pregnancy. Especially the ones that have kids, they’ve been through it so they know exactly what she needs and the answers to all her questions.”