In the world of digitisation, nothing is impossible and the team at Mugler and Bella Hadid can vouch for it. 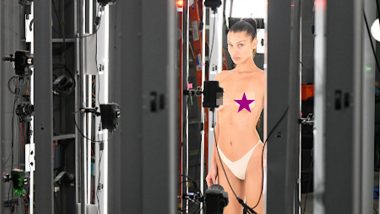 In the world of digitisation, nothing is impossible and the team at Mugler can vouch for it. When the brand's artistic director Casey Cadwallader wanted Bella Hadid to open the show for them, he realised it was impossible. While his other muses were in Paris, Bella was in New York but that wasn't going to stop him from signing her for this new show. He then decided to make her into an avatar and what followed was a beautiful tale of digitisation. Sister's Day 2020: From Gigi Hadid - Bella Hadid to Kylie Jenner - Kendall Jenner, Checking Out Hollywood's Most Stylish Sisters.

"I knew that Florian Joahn, the director of the film, had worked with a lot of CGI artists before, so we could play with CGI in the movie,” said Cadwallader when asked to explain how things worked out in their favour. "We found a studio in Brooklyn and then Haley Wollens, the [New York–based] stylist that I work with, went with Bella to the studio and prepped her hair and makeup. Then all of a sudden Bella was standing there, you know, pretty much naked!” he explained while also adding how he was able to coordinate via Zoom.

The process to create her digital avatar wasn't easy. It required Hadid to stand at the centre of body-mapping cameras in next to nothing while also having her face specially scanned. When the brand got her  3D form, they had to think of ways of incorporating her in their film. Bella Hadid Has The Perfect Face According to Scientific Beauty Standards, Making Supermodel Most Beautiful Woman in The World

The model opens the video wearing a white tank and seamed jeans and later transforms into a Pegasus-centaur hybrid leaping off the Palais Garnier. She also closed the film with the rest of the cast in a black bodysuit.

(The above story first appeared on LatestLY on Oct 23, 2020 10:19 AM IST. For more news and updates on politics, world, sports, entertainment and lifestyle, log on to our website latestly.com).