It's time to choose your fashion favourirte! Kriti Sanon and Tara Sutaria and here to teach you how to dress up this Diwali. So, tell us who is your pick? Golden Kriti or Silver Tara! 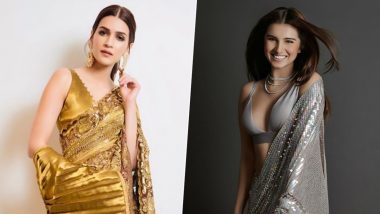 It's always a delightful moment during the festive season when we see our Bollywood celebs putting their best fashion foot forward. Depending upon their individual tastes, each of the B-townie tries to bring something glamorous and different for fans to ogle at. Having said that, we specifically will be talking about two actresses here today, whose saree game has impressed us and how. The divas are none other than, Kriti Sanon and Tara Sutaria. One of the main reasons, we chose these two for a style battle is that both the girls are wearing a nine-yard from the same designer, Manish Malhotra. Other reason is the contrasting colours: gold and silver. Fashion Face-off: Kareena Kapoor Khan or Malaika Arora - Who Styled this Crinkled Lehenga by Itrh Better? Vote Now.

Elaborating on their looks, while the Housefull 4 actress, Kriti opted for an antique metallic gold zari saree with a flowy pallu. Tara, on the other hand, went the sexy way and opted for a silver glittery saree with a bralet kinda blouse. The highlighting part in each of the babe's outfit is different, for Kriti its the sheerness and artwork of her outfit whereas for Sutaria, its the blouse which is the clear winner. A closer look at the pictures and its seen that Kriti has donned lots of jewellery, while Tara has just gone the neckpiece route. Fashion Face-Off! Priyanka Chopra or Ariana Grande - Who Pulled off this Berta Corset Dress Better?

Have A Look At Kriti Sanon's Picture, She Is Styled By Sukriti Grover:

And Here's A Look At Tara's Shimmery Saree:

It is really difficult to pick one fashion winner here, as both, Kriti and Sara look mind-blowing in Manish Malhotra creation. In a nutshell, for fashion conscious people who love to show their bod and do not shy away from exposing, will surely be on Tara's side, whereas the ones who are crazy behind zari and heavy work will like Kriti's look more. So what's your pick? Are you team Kriti Sanon or team Tara Sutaria? Let us know in the comment section below.

(The above story first appeared on LatestLY on Oct 29, 2019 06:03 PM IST. For more news and updates on politics, world, sports, entertainment and lifestyle, log on to our website latestly.com).