Priyanka took to Instagram to share a few pictures of her interview wardrobe. She opted for a yellow blazer that she paired with a similar-looking skirt. The ensemble had a few details in black. 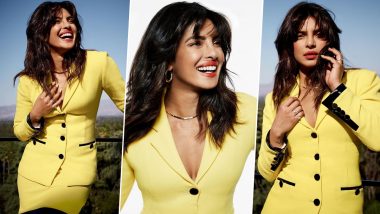 Priyanka Chopra has always been on the top of her fashion game. Be it her glamorous Met Gala looks or her edgy Cannes wardrobe, the actress knows how to make heads turn. Chopra's film The White Tiger, which premiered online yesterday, was busy promoting her film in the past few weeks and while she did all the interviews from home, she made sure she kept it glam anyway. Earlier talking to Netflix Queue about her film, Priyanka made sure she did it in the chicest way possible. The actress dressed up for the event and was looking brighter than the sun in the pictures she shared online. Priyanka Chopra Slays It In Black On The Sets Of Quantico Season 3.

Priyanka took to Instagram to share a few pictures of her interview wardrobe. She opted for a yellow blazer that she paired with a similar-looking skirt. The ensemble had a few details in black that accentuated the whole look. She let her hair open and let the wind add drama to her hair while she got clicked. She added a couple of silver rings and a golden chain, earrings to go with her look. She kept her makeup minimal and added a dark shade of lipstick to highlight her features.

Earlier, the actress spilled the beans about starting a family with her husband Nick Jonas. She opened up about her recent statement of having as many children as it takes for a 'cricket team' and told E! News, "Family is a big part of my life, it's always been a part of my dreams. And I'll take what I get, you know? Leave it up to the God almighty." She also opened up about her equation with Nick and revealed how the lockdown was a very special time for the two. The two celebrated their second wedding anniversary in London last year. Priyanka Chopra Jonas' Perfectly Contoured Cheeks In Her 'Sunkissed' Office Selfie Is Prompting Us To Take Makeup Tutorials From Her!

Talking about the amazing response that The White Tiger is receiving, Priyanka said, "I read this book, Victor, in 2008 when it came out and it was so provocative, and it moved me and it made me uncomfortable, because it, you know, talks about this class disparity that exists all over the world. It's extremely topical, unfortunately." The film revolves around an ambitious yet cunning Indian driver played by Adarsh Gourav who uses his sharp-witted tricks to escape from poverty. Directed by Ramin Bahrani, The White Tiger is now available for everyone to watch on Netflix.

(The above story first appeared on LatestLY on Jan 23, 2021 06:42 PM IST. For more news and updates on politics, world, sports, entertainment and lifestyle, log on to our website latestly.com).