Rhea Kapoor Birthday: 5 Outfits Worn by the Fashion Geek That Prove Her Love for Power Dressing

Sonam Kapoor might be known as the style icon of the industry but most of her most chic outfits are the mastermind of Rhea. She has a unique style sense that helps her stand apart. 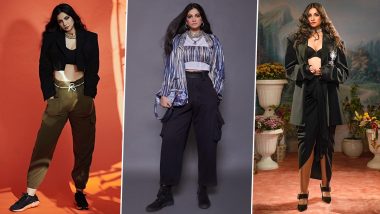 Rhea Kapoor needs no introduction. She has made a name for herself in the industry and is an inspiration to many when it comes to fashion. Sister of Sonam Kapoor and daughter of Anil Kapoor, the entrepreneur ditched the acting route and gotten herself into fashion and production. The Kapoor kid produced Kareena Kapoor, Sonam, Swara Bhasker and Shikha Talsania starrer Veere Di Wedding and forayed into the production space successfully. But more than her work in the movie, Rhea is known for her class apart fashion sense.  Rhea Kapoor Birthday Special: The Lady Who Defines the Word 'Fashionista'

Sonam Kapoor might be known as the style icon of the industry but most of her most chic outfits are the mastermind of Rhea. She has a unique style sense that helps her stand apart. We can say it is a perfect blend of boho and classy and she has a penchant to nail outfits that don't seem like everybody's cup of tea. While she might have restricted being a stylist to her sister and Bebo, the fashionista herself often treats fans with some bomb outfit. She is the true meaning of power dressing.

Rhea is celebrating her birthday today and to honour her special day, we are here to look at some of her best outfits that are all about power dressing. From a basic bralette to a classic skirt look, check out 5 of Rhea's best looks.

Rhea is seen wearing a pair of white pants with a white shirt and blazer in this picture. She gave a twist to a very basic look and unbuttoned the shirt which she topped with a black bralette. The long coat has a unique print that adds drama to the look.

Rhea paired a set of olive-coloured pants with a black bralette and a black crop jacket. The look is classy and the golden statement choker and minimal makeup are doing wonders for Rhea in this look.  Rhea Kapoor Birthday Special: Sonam Kapoor's Sister is a Devotee of Fashion and These Instagram Pictures Are a Proof of It.

This is one of our favourite looks of Rhea's. She wore a printed blue blouse with a jacket cut out of the same cloth and paired it with a pair of black pants. She added a white crop top and statement jewellery to this look and only Rhea can be so experimental with her look and manage to nail it every time.

Rhea Kapoor In All Black

Another stunning outfit worn by Rhea was this all-black outfit. The outfit belonged to Masaba's new collection in which you can see Rhea rock an asymmetrical skirt with a bralette and coat. The look in effortlessly hot and we how Rhea is carrying the look like a boss.

Rhea loves to opt for all-black outfits quite often and this one is a classic one. She wore a casual outfit consisting of black pants, a sexy bralette, a mesh top and a denim jacket. The look was as basic as it could be but Rhea gave it a very chic twist and added glamour to the look.

Rhea loves to experiment with her looks and we love to see how she successfully creates new, glam looks. She also has her own fashion brand Rheson with Sonam and a special line designed in collaboration with Masaba Gupta. She's also experimented with a jewellery design by working on a line with Pipa Bella. Join us in wishing the fashionista a very happy birthday.

(The above story first appeared on LatestLY on Mar 05, 2021 09:10 AM IST. For more news and updates on politics, world, sports, entertainment and lifestyle, log on to our website latestly.com).