Urvashi is working hard toward creating a successful career for herself and she is doing it in stunning outfits. She is a fashion icon for many as we mentioned earlier and more than her outfits, what we love about her is her stunningly quirky collection of sunglasses. 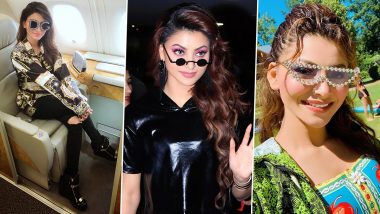 The gorgeous Urvashi Rautela often serves us fashion goals and is an inspiration for many. The actress is all about fashion and we often see her share pictures, flaunting her shimmer, chic and sexy outfits. The actress, who hails from Haridwar,  made her debut in Bollywood with the film Singh Saab The Great as the female lead opposite Sunny Deol. She was initially modelling and had represented India in Miss Universe 2015 as well. The actress was even offered to work in Ishaqzaade but she had refused to take up the role to focus on the pageant. Urvashi Rautela Reveals She Was Offered a Superhit Sequel Starring Amitabh Bachchan but Couldn’t Be Part of It.

After her debut, Urvashi went on to do two other Hindi films, Sanam Re and Great Grand Masti and featured in songs like "Laal Dupatta" with Mika Singh and Anupama Raag and "Gal Bann Gayi" along with Vidyut Jammwal. Urvashi gained much popularity after this and went on to be a part of films like Kaabil, Hate Story 4,  Pagalpanti and her last film Virgin Bhanupriya. The actress also launched her app which gives fans information about her.

Urvashi is working hard toward creating a successful career for herself and she is doing it in stunning outfits. She is a fashion icon for many as we mentioned earlier and more than her outfits, what we love about her is her stunningly quirky collection of sunglasses. Today as the actress is celebrating her 27th birthday, we bring to you 5 of the best pairs owned by the actress. Black Rose: Urvashi Rautela Looks Stunning in a Red Saree in the First Look Poster of Her Telugu Debut.

Check Out The Posts Below:

The Dolce and Gabbana Sunnies:

In this picture, we can see Rautela don big Dolce and Gabba sunglasses while she travels. She has paired her Versace outfit with these cool pair of sunnies and we are totally digging this look.

The Classic Round Sunglasses:

We all have this pair of brown round glasses but only Urvashi can make them look so good. She paired the sunnies with a stunning orange ensemble and look ethereal in it.

This is one of our favourite pairs that Rautela owns. She ditched the basic looking oval sunglasses and opted for a heart-shaped one. She is slaying this casual look like a boss and the sunglasses are a perfect touch to amplify her look.

The Small Round Sunglasses:

Urvashi's eyes are doing the talking in this picture. She wanted to keep it cool but also let people notice her beautiful eye makeup. She opted for these small round glasses with a black leather outfit and it suited her perfectly.

Urvashi has always been about the bling and this pair of sunnies is all about it. The actress is seen enjoying a sunny day in this amazing pair of sunglasses and a little dazzle never hurt anyone.

These picture proof that Uravshi loves to collect the best pair of sunglasses and she has an impeccable choice. Join us in wishing the actress a very happy birthday.

(The above story first appeared on LatestLY on Feb 25, 2021 08:40 AM IST. For more news and updates on politics, world, sports, entertainment and lifestyle, log on to our website latestly.com).