Ahoi Ashtami 2020 Date And Shubh Puja Muhurat: Know The Significance And Mythological Story Related to the the Day When Women Fast For Their Children

Ahoi Ashtami is a Hindu festival celebrated about 8 days before Diwali wherein Goddess Ahoi is worshipped. Women who have children worship the goddess for the well-being and long life of their children. Ahoi Ashtami 2020 falls on November 8. Women observe a nirjala fast during which they do not even drink water the whole day. 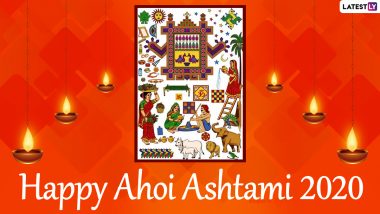 Ahoi Ashtami is a Hindu festival celebrated about 8 days before Diwali wherein Mata Ahoi or Goddess Ahoi is worshipped, a form of Goddess Parvati. Women who have children worship the goddess for the well-being and long life of their children. The observance is also known as Ahoi Aathe during which women observing the day keep a fast. It falls on the Ashtami Tithi of Krishnapaksha, the eighth day of the lunar month. Ahoi Ashtami 2020 falls on November 8. Women observe a nirjala fast during which they do not even drink water the whole day. They break the fast in the evening by offering water to the stars. The fast is believed to bring blessings in the life of their children. Ahead of Ahoi Ashtami, we bring to you date, significance, mythologies and Ahoi Ashtami Shubh Puja Muhurat. WhatsApp Stickers, GIF Image Messages, Facebook Greetings, SMS and Quotes to Celebrate the Festival Dedicated to Goddess Ahoi.

Women pray by keeping a photo of Goddess Ahoi along with the images of young children and a lion. A small earthen pot is kept on the top of the pot with water.  Sarai Seenka, a commonly used shoot is offered to Ahoi Mata and lion. Food items including 8 types of Puri and 8 types of Halwa are offered to a Brahmin which is a customary practice. Wish Happy Ahoi Ashtami With Beautiful WhatsApp Stickers, Greetings and Messages.

There are many legends attached to the observance. One of the popular ones says that, a moneylenders' wife was in the forest to get the soil to renovate her house ahead of Diwali. While digging inside the forest, she accidentally kills a lion cub with the spade in her hand. The animal cursed her with a similar fate and within a year all her 7 children died.

Overcome by grief they decided to kill themselves during a pilgrimage. As they were walking, they fell unconscious and God had pity on them and asked them to go back. They were asked to serve a holy cow and worship Goddess Ahoi as it was believed to the protector of the offspring of all living beings. The couple thus returned home. On Ashtami, the women drew the face of the young lion, fasted and prayed to Goddess Ahoi. She repented for her sins and was pleased with and gave her the boon of fertility. Hence, women who are barren also pray to Goddess Ahoi for children.

(The above story first appeared on LatestLY on Nov 07, 2020 10:03 AM IST. For more news and updates on politics, world, sports, entertainment and lifestyle, log on to our website latestly.com).