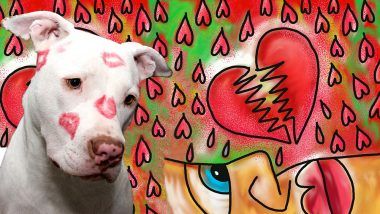 Valentine’s Day is believed to the favourite day for lovebirds. You see balloons, roses, chocolates, bouquets and couples painting the town red with love. But what if the sight of such things makes you cringe instead of swoon? This season of love has come up with many events that exactly share your sentiments. Whether you are hurt or single, heartbroken or just a plain hater; the anti-valentine campaigns in India might match your unexplained hatred for an overdose of love. These surprisingly delightful bitter campaigns have made every singles Valentine's Day go super awesome.

Amongst the many campaigns, there are few who share valid reasons behind carrying out such an event but others could not convince except for the fact that the anti-valentine campaigns are on trend. Check out the list of campaigns shouting against Valentine’s Day 2018:

Indian comedy sketch group, All India Backchod (AIB)’s innovative activities have always impressed the netizens. Be it their staunch opinion on current happenings through videos or introducing new genres of comedy such as the famous but controversial AIB Knockout; it has gained massive popularity with the precise humour. Yet again, the team has come up with their single revolutionary movement called 'Pyaar Ek Dhoka Hai,' roughly translates to 'Love is a myth,' which in no time went viral on social media. From shout-out sessions, non-stop quirky posts, to super cool t-shirts, their fun message has been vastly welcomed by Valentine haters.

Lucknow University issues advisory to its students to not to roam inside the premises of the university on Valentine's Day (14.2.2018). Disciplinary action will be taken against whosoever is found violating the advisory. pic.twitter.com/dQ8cdESICK

Students of Lucknow University has been asked—no, ordered to not to attend college lectures on February 14. There will be no classes, no exams or any cultural programmes on campus and under no circumstances should students be seen in the premises on that day. The authorities have put forward the reason behind such order is because the University firmly believes that V-Day is a ‘western culture’. While students have quoted the decision as ‘examples of small-mindedness’; it is a 'great' bad news for singles --- no lectures, no classes, no exams and no love birds involved in PDAs around for one whole day!

To protest against Valentine’s Day celebration, Bharat Hindu Front cadres on February 14 has performed a marriage ritual between a dog and a donkey in Chennai. The just-married-couple were wearing garland with flowers and had their foreheads marked with turmeric. The party workers raised slogans against Valentine’s Day. But sadly, before the protest could reach to the mass, the Chennai Police detained protestors.

It is a call of each nation,

Matri Pitri Pujan Diwas or Parents Worship Day initiated by godman Asharam Bapu has also earned quite a good response over the years. Many people will celebrate worshipping their parents instead of spending time with their loved one. Not a bad thought! However, this year it is slightly different because not much of big hoardings are seen around the cities and also, Bapu is in jail, serving his term on rape charges.

With or without the ongoing campaigns, singles and Valentine haters have indeed found their easy lane. Gone are the days where people would find comfort in leisure listening to compiled playlist, watching ex’s picture and get worn into bits or constructively trying to focus on improving oneself (strict diets). But now the times have changed rapidly with internet supercharging the phenomenon so much that we cannot help but say - Love or hate but you cannot ignore Valentine's Day!

(The above story first appeared on LatestLY on Feb 14, 2018 06:55 PM IST. For more news and updates on politics, world, sports, entertainment and lifestyle, log on to our website latestly.com).