The Muslim month of fasting, Ramadan will begin from 1 April 2022. The whole one-month period teaches people to put more effort into the religious and spiritual aspects of Islam and refrain from violence, anger, and greed. Read more to know about the importance of Ramadhan, and different crucial fasting traditions. 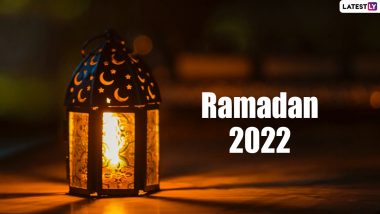 Ramadan is the ninth month of the Islamic calendar which is also referred to as Ramzan, Ramazan, Ramadhan, or Ramathan. The month is celebrated by Muslims worldwide and it is the time when Momedians keep the sawm or Rozah that is known as fasting in Islam for a month. During, Ramdan people visit the mosque and spend several hours reading prayers and studying the Holy Quran. It is said that during the month of Ramzan the holy book, the Qur’an was revealed to the Prophet Muhammad.  The Islamic lunar calendar follows the phases of the moon where months begin with the first crescent of a new moon, and the new day begins after sunset. Therefore, the crescent moon of the fasting month is most likely to be visible on Friday, April 1, which is corresponding to the 29th of the Islamic month of Shaban. Thence, April 2, will be the first day of Ramadan 2022 in India. Sha'ban or Shaban 2022: Start Date of Pre-Ramadan Month, Fasting Ritual And Significance Of The Eighth Islamic Month.

The fasting during Ramzan or Rozah begins at dawn and ends at sunset. Depending on the sightings of the moon the fast ends for an entire month (29 to 30 days). It is stated in the Quran that Allah says, "O you who believe, fasting is prescribed for you as it was prescribed for those before you, that you may develop God-consciousness". That's why Muslims who keep Rozah during the month not only abstain from drinking, and eating but also from activities like carnal relations, consuming tobacco, and sinful behaviours. However, there are certain exemptions for fasting - menstruation, pregnancy, diabetes, severe illness, or travelling.

Significance Of The Holy Month Of Ramadan

Muslims hold that all scripture was revealed during Ramathan, the scrolls of Abraham, Torah, Psalms, Gospel, and Quran having been handed down on the first, sixth, twelfth, thirteenth, and twenty-fourth Ramadans, respectively. Furthermore, the month of Ramadhan is all about self-reflection, positive thinking, and teaches people to practice discipline, sacrifice, and empathy for those who are less fortunate, thus encouraging actions of generosity and compulsory almsgiving to the needy. Muslims also read five prayers daily as usual and in addition to it during Ramadan, they also recite a special prayer called the 'Taraweeh prayer' or Night Prayer.

(The above story first appeared on LatestLY on Mar 13, 2022 07:52 PM IST. For more news and updates on politics, world, sports, entertainment and lifestyle, log on to our website latestly.com).